Sergiu Tudose
Some people just never learn, do they? Last year, we saw this very same 2020 Honda Accord Sport 2.0T race a different Charger 392, both vehicles stock, and the result was emphatically clear. The Charger’s 6.4-liter HEMI V8 is just too much for the Accord to overcome.
6 photos

But maybe, just maybe there’s a chance for the Japanese mid-size sedan to pull one out of the hat, seen as how they’re racing over an 1/8-mile distance, instead of a full quarter mile. If the Accord can just get a good enough start, and if the Dodge spins its wheels just long enough off the line, the Honda might claim what would still be an unlikely victory.

Let’s go through the numbers again, and let’s try to keep a straight face here. The Accord, which by the way is not even in the same segment as the Dodge Charger – it's a Camry rival, while the Charger is more Avalon-sized – is powered by a 2.0-liter VTEC turbocharged four-cylinder engine, putting down 252 hp (255 ps) and 273 lb-ft (370 Nm) of torque.

The front wheels are getting all that action, thanks to a 10-speed automatic transmission. The Accord 2.0T is not a slow car, mind you, needing just 5.5 seconds in order to hit 60 mph (97 kph).

On paper, it’s roughly a second and a half quicker to 60 mph than that Accord, but again, they’re racing over a relatively short distance and sometimes, wheelspin off the line can be a bummer for RWD cars.

Alas, nothing went too wrong for the Dodge on this day, because while it did fall behind once the lights went green, it eventually caught up to the Honda and won the race by a little over half a second. 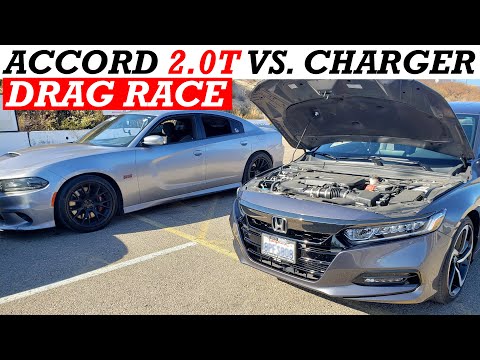