Sergiu Tudose
What we have here are two very different automobiles. Not only are they from different eras, but they’re also aimed at completely different types of people. Watching them go head-to-head in a drag race is almost comical, but nevertheless, everyone deserves a shot at anyone, as I like to say.
6 photos

We should mention that what you’re about to watch is a 1/8-mile race, which is meaningful because it tends to favor cars that may be a little down on power compared to their opponents. Alright, maybe “favor” is too strong a word. Let’s just say you stand a better chance of not getting completely obliterated if you are down on power.

So then, how do these two cars stack up? Well, we have a 2020 Honda Accord 2.0T Sport, which is said to be completely stock. This means no engine mods and nothing to improve overall grip while accelerating.

Unfortunately for the Accord, the Mustang GT that’s also present in this video has been tuned, although the uploader doesn’t specify (likely doesn’t know) exactly what had been done to it.

In the end, the Honda lost – but not before hanging with the tuned Mustang for a good couple of seconds off the line. 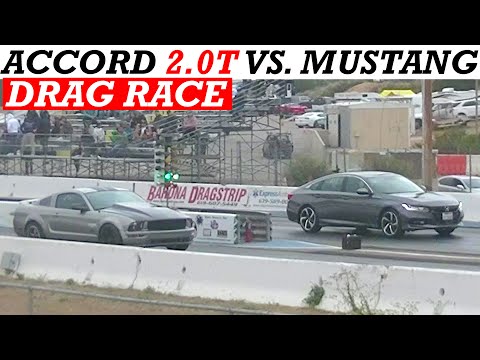