1 2023 Honda Civic Type R Prototype Making U.S. Debut in July, Are You Excited About It?

4 Ford and Honda Decide Against Stands at 2022 SEMA Show, VW Steps In for a Spot

Mircea Panait
Although sedans aren’t particularly desirable in this utility vehicle-driven era, the Accord isn’t breaking a sweat. Honda delivered no fewer than 202,676 units last year in the United States of America, which is pretty darn good in these tremendously challenging times for the automotive industry.
6 photos

The biggest rival of the Camry is currently listed from $26,120 excluding destination charge, roughly four grand more than the Civic Sedan. The LX base trim level is very well appointed right off the bat, although some prospective customers aren’t particularly fond of the 1.5-liter turbo and continuously variable transmission in a mid-size car. The next grade up is much more like it, thanks to an optional 2.0-liter turbo and nine-speed box.

Tipping the scales at 3,356 pounds, which is 1,522 kilograms if you prefer the metric system, the Accord Sport with the better engine and torque-converter automatic transmission is pretty close to what Hyundai charges for the much-praised Elantra N. Priced at $32,150 for the sole trim level available right now, the South Korean compact sedan has one single option to speak of in the guise of a wet-clutch transmission, an eight-speed DCT.

From a dig, the Accord 2.0T launches better than the Elantra N should’ve had this one in the bag. On the other hand, the lower weight and extra torque speak for themselves over the quarter mile. The Hyundai also proves its mettle from a roll, but still, the plucky Honda deserves a standing ovation. 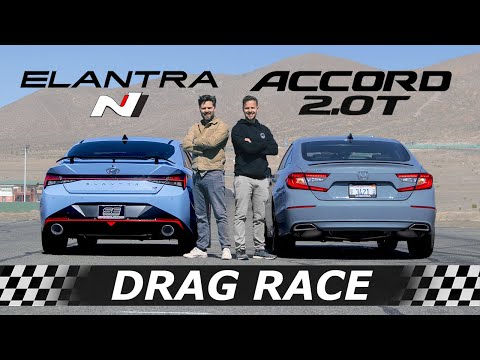