2 2021 Dodge Durango Hellcat Vs Mercedes-AMG GLS 63 Comparison – Who Did It Better?

4 Honda Accord 2.0T Drag Races BMW 330i xDrive, the Word Is Absolute Humiliation

Sergiu Tudose
Have you ever wondered how a budget-friendly, yet reasonably “spirited” mid-size sedan would handle itself if challenged to a straight line drag race by something considerably more powerful, yet also a lot heavier? If you have, here’s your chance to see how such a race would play out over a 1/8-mile distance.
7 photos

Technically, an 1/8-mile race is much “friendlier” to a car that’s down on power, compared to a classic quarter mile bout. Grip is even more important over shorter distances, while drag becomes slightly less important, since you don’t get up to really high speeds.

Now, let’s look at our two contenders here, starting with the underdog, which is a 2020 Honda Accord 2.0T Sport, perfectly stock – you can even picture the owner driving one straight out of the dealership lot and onto this drag strip. No engine mods, no radials, nada.

The Honda is powered by a 2.0-liter turbocharged VTEC four-cylinder unit, good for 252 hp (255 ps) and 273 lb-ft (370 Nm) of torque, transferring everything to the road via a 10-speed automatic gearbox. Mind you, this is not a slow car. It will still get you from zero to 60 mph in around 5.5 seconds, and that’s very respectable.

As for the Dodge Durango SRT Hellcat, well, it has nearly three times more power than the Accord thanks to its supercharged 6.2-liter HEMI V8, the exact same unit one would find underneath the hood of a Challenger SRT Hellcat or a Charger SRT Hellcat. It needs no introduction.

This flagship-spec Durango puts down 710 hp (720 ps) and 645 lb-ft (874 Nm) of torque, with everything going to all four corners via an eight-speed automatic gearbox. If you’re just going to 60 mph from a stop, the Durango Hellcat can get you there in 3.5 seconds.

So then, of course, the Dodge won this race, crossing the 1/8-mile marker in 8 seconds flat while doing roughly 90 mph (145 kph). The Honda, meanwhile, needed 9.17 seconds at just over 79 mph (127 kph). Sometimes there really is no replacement for displacement. 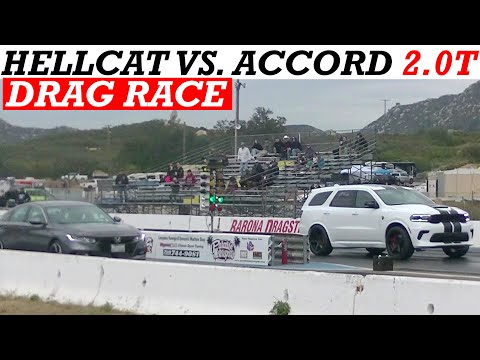