4 Fat Tire Ultra Is Blix's Most Versatile E-Bike Yet, Boasts a Range of 80 Miles per Charge

5 Ariel Rider's Fat Tire Kepler E-Bike Can Hit 32 Mph and Offers Over 75 Miles per Charge
Car video reviews:
Up Next

When it comes to solid, folding e-bikes, HeyBike has got game, with the manufacturer presenting us with a wide range of fat-tire wheelers that are both easily portable as well as sturdy enough to handle pretty much any terrain. The limited-edition Mars Hyper is one of them.
10 photos

A few months ago, I covered HeyBike’s Ranger fat-tire folding e-bike, one of the manufacturer’s priciest models. The bike can carry up to 330 lb (150), has a solid construction, 20” x 4” all-terrain tires, and a pretty impressive range of up to 48 miles (77 km) on a charge.

The Mars Hyper is even better in terms of range. This wheeler is an upgraded version of the manufacturer’s Mars model and its availability is limited to only 500 units. Each unit features a “one million miles” souvenir plate and has its own customized number on the plate. The yellow and black color design is also limited to this bike. There’s also a front basket included and a souvenir box with two bike keys and a keychain inside.

HeyBike also upgraded the color display on the limited-edition Mars Hyper, making it more visible. But the most significant upgrade is the battery, with the Mars Hyper packing a 15 Ah lithium-ion battery instead of a 12.5 Ah one, as is the case with the standard Mars. That means the e-bike offers an increased range of up to 55 miles (88.5 km) on a charge with the pedal assist. By comparison, the standard Mars folding e-bike only offers up to 48 miles (77 km) per charge, which is still a good number.

Mars Hyper features the same 500W brushless gear motor and the wheeler is labeled as a Class 2 bike. Other notable features of the e-bike are its folding design, its alloy wheels and 20”x4” fat tires, its electric horn, its USB charging port, and the front suspension fork.

HeyBike sells the limited-edition Mars Hyper for $1,578 and says there are only 42 units left. 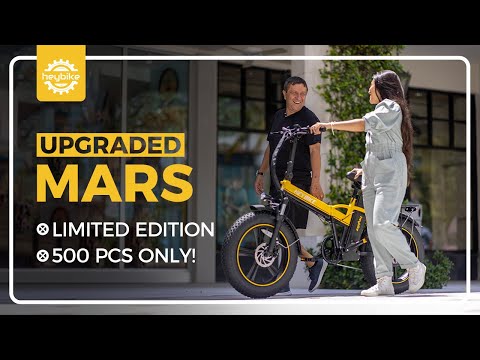