Here's How the Porsche Taycan Electric Sedan Looks Underneath and Inside

The Taycan is a first for Porsche and the Volkswagen Group as a whole. Their first performance-oriented EV has been praised time and again for the way it handles, blistering acceleration, and high-quality interior, yet there are areas where the J1 vehicle architecture has limitations.
13 photos

Not to be confused with the upcoming Premium Platform Electric or PPE, the J1 in the Taycan Turbo can’t do better than 201 miles according to the Environmental Protection Agency. That’s seriously low on the Tesla Model S Long Range, and even the Nissan Leaf with the bigger battery is much obliged to travel up to 226 miles on a single charge.

“Still, didn’t Porsche develop the J1 and the Taycan with a focus on the driving experience?” That’s right, dearest reader! The higher-ups in Stuttgart could have played it safe with an emphasis on range, but then again, what’s more important in a Porsche? The answer is obvious…

If you were wondering how the car looks stripped down to its bare bones, the PCA will walk you through in the following video. Inside and underneath, there’s no denying that Porsche invested a lot into the research and development of the J1 and Taycan. The three-chamber air suspension, battery technology, and the cooling system are also featured in the clip.

Porsche Club of America hosted the Tech Tactics West at the dealership technician training facility in Eastvale in late November, teaching the mechanics how to work on a Porsche that doesn’t feature a boxer engine or a twin-turbo V8. Before the Taycan, the German automaker had a couple of plug-in hybrids to offer with force-fed V6 and V8 powerplant options.

Even the 911 will be electrified for the 992 generation, which goes to show that Porsche isn’t messing around any longer. Every second Porsche will be electrified by 2025, which means that the electric onslaught will account for 50 percent of business in five year’s time. By the way, have you heard the Macan EV is coming on the Premium Platform Electric? 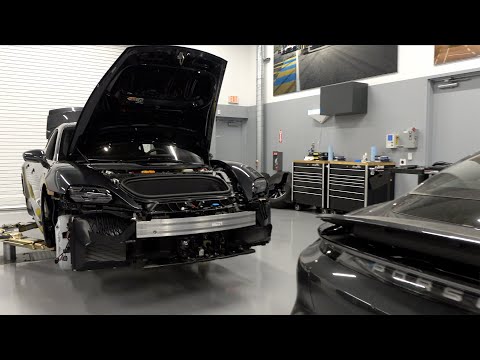