What may very well be the quickest and likely the last Porsche homologation special powered by a naturally aspirated engine, the upcoming 2023 Porsche 911 GT3 RS has its sights further than ever.
52 photos

Since Zuffenhausen has always chosen to go for clinical cornering precision and efficient braking to the detriment of huge horsepower and torque figures for its GT3 models over the years, the new GT3 RS is not going to have a turbocharged or hybrid torque monster over the rear overhang.

Instead, the slowly becoming less common solution of fitting its most track-ready GT models with a naturally aspirated engine that can rev to the stratosphere will be tried once more, and it’s probably for the last time in Porsche’s evolving history.

The 911 GT3 RS 992 is expected to feature a slightly modified version of the same 4.0-liter flat six found in the bonkers 911 GT3, which can happily rev to 9,000 rpm and force a smile on the driver’s face with every push of the accelerator.

That said, we should expect a tiny bit more power, with rumors mentioning around 530 horsepower and at least 480 Nm (354 lb-ft) of torque, accompanied by what sounds like an even higher rev limit.

Unlike the ‘regular’ GT3, the RS version will exclusively send all that power to the rear wheels via a PDK transmission, as efficient lap times have always held more value than a purist’s idea of driving fun on an RS model.

Apart from the otherworldly exhaust and induction notes that the atmospheric engine delivers while being trashed around the many dangerous corners of the Nurburgring Nordschleife, the 2023 Porsche 911 GT3 RS will also introduce the most hardcore aerodynamic package on a road-going Porsche ever.

If you thought that the ‘swan neck’ wing on the latest GT3 was a bit large, get ready to reconsider your opinion once the RS is launched with a picnic table wing that also acts as an F1-derived DRS system.

This time truly inspired by the RSR racer, the new GT is expected to completely demolish all previous production Porsche lap times on most circuits, including the much more powerful GT2 RS, and it could all be mostly thanks to the huge downforce that its aero package brings to the table.

The front end is not that dissimilar to the GT3 but going further back we are greeted by two huge NACA ducts integrated into what is probably an almost unusable front trunk. The two front fenders have a bunch of slits that let all the pressurized air in the wheel wells escape above, and even the double-bubble roof has a couple of stabilizing small fins that direct the air toward the giant picnic table at the rear.

It would be safe to assume that the undercarriage is at least as sculpted to provide the type of downforce that doesn’t increase drag, and we’re anxious to find the actual downforce levels of the car when it goes official in the next few months. 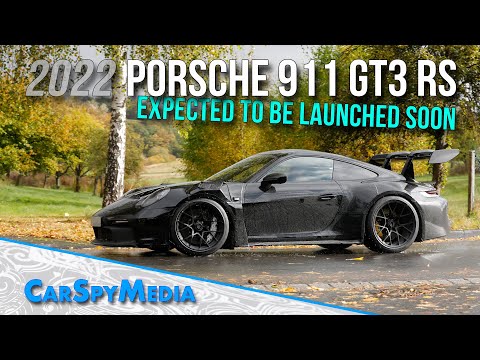