5 1947 Ford Kahuna Woody Is the Coolest Thing You’ll See This Week
Car video reviews:
Up Next

If you thought that a restomod couldn’t get more impressive than a 1,000-hp, carbon fiber-bodied muscle car, this 73-year-old Woody Wagon is here to prove you wrong.

Today, wood is only used on expensive cars to accentuate the lavishness of their cabins but more than a century ago, the material was used to craft wheels, chassis reinforcements, and exterior body panels. The industry quickly switched to metal but some of these vehicles were subsequently modified by independent coachbuilders or local carpenters who used hardwood to enlarge their original passenger compartments.

Affectionately called woodies, they became very popular so, naturally, established carmakers decided to capitalize on this new trend. For example, in 1920, Henry Ford bought 400,000 acres of Michigan forest for the sole purpose of creating panels for factory-built Woodies. These vehicles were manufactured until the late 1940s when they gradually began to be replaced with steel-bodied variants decorated with wooden panels.

One example of an original Woody, a 1948 Ford four-door station wagon, managed to survive for more than six decades and ended up in the hands of an enthusiast who decided to have it fully restored. We don’t know who exactly was behind the restoration, but we do know they did a terrific job. All the wooden components were either refurbished or replaced, and the metalwork was also cleaned up of rust and given a gloss black finish.

After being brought back to life, the wagon was put up for sale, ending up in the hands of a huge Woody aficionado. The new owner was pleased with the flawless restoration work, yet he wasn’t thrilled about its modest performance and tank-like handling. After thinking it through, he decided to have it modernized and chose Schwartz Performance for the job.

Based in Woodstock, Illinois, about 41 miles (66 km) northwest of Chicago, the company founded by lifelong road racer Jeff Schwartz and his son Dale rose to fame for creating some amazing, modernized classics that are not only extremely powerful but handle surprisingly well. One example is the 900-hp Oldsmobile Cutlass 442 that we featured in a previous article.

Like the Cutlass, the Ford's original frame was replaced with a bespoke version of the company’s renowned G-Machine chassis. Since the owner prioritized maneuverability and ride comfort, the Schwartz Performance crew equipped the structure with a new power steering rack connected to a Flaming River tilt column, beefed up the suspension with Ridetech single-adjustable coilovers shocks, as well as splined sway bars on both axles. To make sure that the 1948 Ford could brake like a modern sports car, fitted six-piston Baer calipers that hugged onto 14-inch (35.5 cm) slotted and drilled rotors behind all four wheels.

While some purists were enraged by the decision to put a Chevy LS3 into the aforementioned Olds, they can breathe a sigh of relief because for this wagon, got a 5.0-liter Gen 3 Coyote.

The all-aluminum crate engine that came standard with high-performance internals such as hypereutectic aluminum pistons, Boss 302 sintered steel connecting rods, or a forged steel crankshaft was paired with a Ford Performance Roush R2650 TVS supercharger kit. Cooling was provided by a custom-built radiator and the original Ford Performance intercooler, while the exhaust gasses flowed through a Schwartz Performance-designed stainless system with Magnaflow mufflers.

In this configuration, the motor could produce about 700 hp, but to make the Woody safer to drive, it was limited to 560 hp, which is still more than five times what its original V8 could make. All that power got transferred to the rear wheels through a Tremec T56 six-speed manual and a Currie 9-inch, heavy-duty, iron rear end.

The team also made some modifications to the interior. While some of the original details like the wooden door panels or the decked-out headliner were maintained, everything else was redesigned. The custom, retro-inspired, dashboard that featured five analog gauges, a chrome vent in the center, and controls for the modern air conditioning system were kept from the previous restoration. However, new ergonomic bench seats were built from scratch and upholstered in two-tone, washed brown leather, with the darker tone material being used for the new polished steering wheel.

Back when the Woodie was built, it had no side mirrors. The owner didn’t want to ruin the original design by fitting a pair, so the team suggested a high-tech camera system. Thus, the vintage wagon was equipped with cameras on the front fenders and tailgate, all connected to an LCD that was subtly integrated into the headliner, above the rearview mirror.

Restored and subsequently modded, this beautiful blend of steel and wood now handles and performs like a modern sports car, which makes it one of the coolest, most interesting restomods we’ve seen.

Lou Constable visited Schwartz Performance this summer and interviewed Mark Greenisen, one of the people responsible for the modifications. You can watch his video below to learn more about the amazing ride and hear its supercharged V8 rumbling. 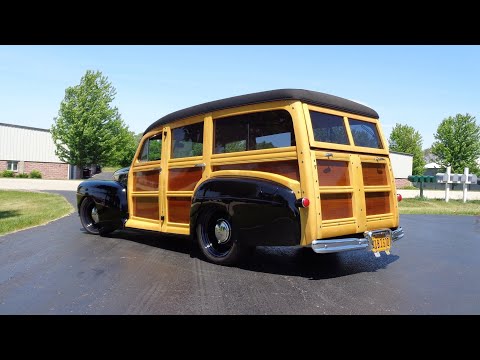