4 Nardo Gray or White Lambo Urus on RDBs? That Is the Forged CF Widebody Question!

Home > News > Custom Cars
Aurel Niculescu
Born in 2017 as the feisty replacement of McLaren’s 650S, the McLaren 720S is the proud nephew of the MP4-12C, the company’s first-ever production car that was designed, developed, and built in-house.
21 photos

As such, it had quite big shoes to fill in. No worries, only half a decade later no one will dare say it did not live up to expectations. Especially when it also came out to play with Velocity, Spider, and 765LT versions, among others. But even the regular McLaren 720S can be pretty much bigger than the sum of its parts, in the right hands.

As such, here is an example of the 4.0-liter twin-turbo 710-hp sports car coming out of the Hollywood, California-based headquarters of RDB LA after countless overtime hours. But the good folks over at RDB, who have another YouTube vlog episode out, or even two, say it was more than worth the trouble. And they also let us be the judges of the transformation, which includes a tasty little Lambo secret, among other things.

You see, the McLaren 720S wasn’t initially dressed in Lamborghini’s matte Grigio Titans (now a little more satin thanks to the clear bra). Instead, the sports car was stripped to the bare metal bones, fully repainted, and then reassembled with additional aftermarket goodies. Obviously, those also include the full Ryft forged carbon fiber kit, as well as a nice set of Vossen wheels that were actually PTS (paint to sample) to match the new Grigio Titans look.

Talking about attention to detail, the other episode that is embedded second below features a different type of posh Brit automobile. On this occasion, it is a long-wheelbase 2023 Land Rover Range Rover LWB V8 that got dressed in a two-tone wrap and also put on humongous two-tone RDB Wheels. We have no idea if both have the same owner, but they sure would look great complimenting each other in different styles of gray and black in a ‘man cave’ garage! 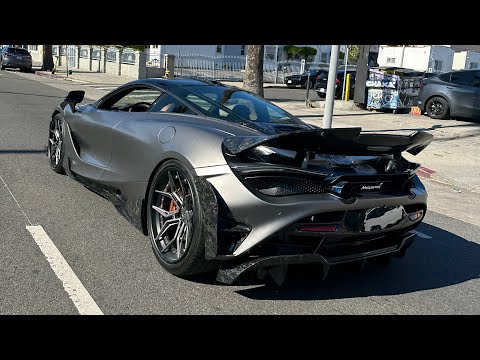 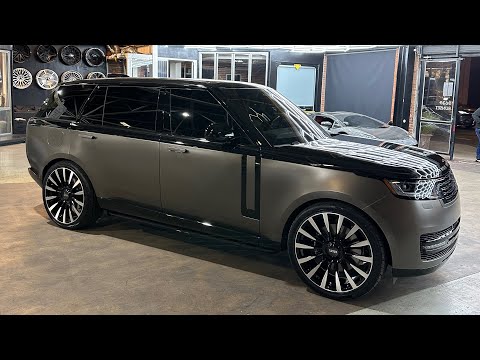