3 Top Gear Counts Down the Best Performance Cars of 2021, Number One Will Surprise You

A few years ago, a good friend of mine called me and asked if I could do him a favor. He wanted me to drive his Golf 2 from one garage to another, some 20 miles away. But there was a catch: it was a fully-stripped-out car with a race-spec exhaust and a massive 2.9-liter VR6 engine. Still to this day, that was one of the most insane cars I've ever driven.
21 photos

For anyone living in Europe, the Volkswagen Golf was a good way to get into cars. They were cheap, reliable and you could easily find parts for upgrading them. While the most common modifications included changing the wheels and lowering the car, some people took things a lot further. My buddy was into drag racing back in the day, but he didn't have the budget to build a high-horsepower machine. Instead, he opted for a lightweight chassis and an engine that offered plenty of torque.Old VWs don't die, they just get lower
But the VR6-swapped Golf was quite scary to drive. Not because it felt fast, but because it also felt like it could bite your head off if you tried pushing it too far. The car would understeer a lot, and it wasn't easy to go fast around the corners in it. Over the years, VW enthusiasts have experimented with a wide variety of engine swaps. While some found the 1.9-liter turbo-diesel quite capable for the job, most people still wanted to use gasoline-powered engines.

The 1.8-liter Turbo felt like the perfect choice as it could be tuned to about 300 horsepower rather easily. And if you're packing that kind of power on a light VW from the '80s, you're bound to catch a few people off-guard. Today's drag race involves three such sleeper cars: a Jetta Coupe, an MK1 Golf GTI, and an MK2 Golf GTI. They will be subjected to four different tests, and they all involve a quarter-mile (402 meters) long piece of tarmac.

But before we jump into the race, let's have a look at the specs. The Jetta is rated for a little over 300 horsepower, as its engine has been upgraded with a K04 turbo, among other things. Weighing in at 2,094 lbs (950 kg) and with launch control at hand, this is going to be a serious contender in today's challenge. The MK1 Golf GTI only has about 280 horsepower to play with, but it's worth noting that it only weighs 1,873 lbs (850 kg). What is power without control?
The MK2 GTI is the most underpowered car lining up for the challenge. At around 240 horsepower, it makes use of a K03 hybrid turbo, and it's also the heaviest car here. Clocking in at 2,204 lbs (1,000 kg) and running on budget tires isn't going to do it any good against the other two cars. All three cars are FWD, so there's also bound to be a bit of wheelspin going off the line. The results are in for the 0 to 60 mph (96 kph) challenge.

The Jetta needed 6.05 seconds to finish the run, while the MK1 GTI was slightly faster at 5.62 seconds. In an unexpected turn of events, the MK2 GTI is just as fast as its older sibling, even though on paper, it seems to be the least capable car here. The individual quarter-mile runs are up next. Again, the Jetta feels rather slow, crossing the finish line in 14.1 seconds, with 111 mph (178 kph) trap speed.

The MK1 GTI is faster once again, with a time of 13.73 seconds and a trap speed of 106 mph (170 kph). The lack of power becomes obvious for the MK2, as it finished this challenge in 3rd place, with a time of 14.27 seconds. It also has the lowest trap speed, at just 100 mph (160 kph). But are the results of this test going to be conclusive for the main event? As the three cars line up, you can't help but get a feeling that the oldest one of the group has a certain aura about it.The last shall be first
The way the Jetta handles the first few moments of the race is either proof that having more power isn't always better or that the driver needs more practice. But it may also be a combination of the two factors. Either way, the MK1 GTI takes the lead, and it seems unstoppable. Although the MK2 GTI held on to the second place for the first part, having less power takes its toll, and it finishes in third overall.

A rerun for the standing quarter-mile race provides the same outcome, albeit the Jetta has a slightly better overall performance. For the last challenge of the day, the starting point is set at 40 mph (64 kph). With no wheelspin to get in the way, technically the Jetta should come out on top. A miss-shift by the MK1 takes it out of the race early and the outcome of the race is just what we expected.

In an attempt to see what would happen with no miss-shifting on behalf of the MK1 GTI, we get to see a second roll-race. But the Jetta is unphased by the whole thing and wins once again. So the important lesson here is: don't just think about increasing horsepower levels when you're tuning your car! Think of the whole package, including chassis upgrades. Remember, balance is key! 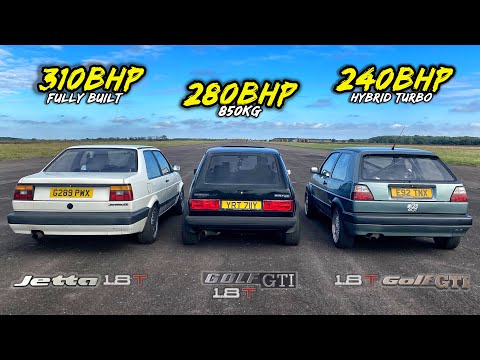