2 1,600-HP GT-R Drag Races Lesser Siblings, It Doesn't All Go According to Plan

Life in the big city can be quite hectic. There's always a lot of noise, the traffic can be horrible, and the whole thing will have you tired way before the day is over. So car manufacturers are looking for different ways of making life easier for their clients. While an aggressive exhaust note can be therapy for some, it can be cruel for others.
14 photos

Because the last thing you need after you've had a rough day is to be stuck in traffic with a car that has "pops and bangs". As comfortable as a BMW might feel, if we're talking about an M car, it's still going to have a certain insane factor about it. Whereas an electric vehicle will provide a seamless driving experience: no cabin noise and excellent driveability. If you're going to sit in bumper-to-bumper traffic day in and day out, an M car doesn't make sense.

Remember all the fuss surrounding the front grille of the new BMW cars? Do you still think it was a bad idea? Because it looks like most people are starting to appreciate the design. But that may also be because these cars have proven themselves over and over again. Who wouldn't want to drive an M3 or an M4 or any kind of BMW M, for that matter? But do you still need to get that kind of car to go fast?

With the progress of EV technology, owning a fast car has become less of a hassle. Your neighbors won't hate you anymore, people won't think you're trying to race them in traffic, and the whole "pops and bangs" story will be a thing of the past. You can enjoy tranquility behind the wheel of an Electric Vehicle when needed, go by unnoticed if that's what you need, but still gap most cars around you at a single push of the throttle.

At this point, we've seen enough ICE vs Electric drag races to figure out what's going to happen. When it comes to having similar horsepower and torque levels, the EV is most likely going to win. But let's just watch and see how these two perform down the quarter-mile (402 meters). The reaction time of the Tesla driver is less than impressive for the first run, but he still takes the lead.

But as soon as they hit 105 mph (170 kph), they are neck and neck, and it looks like the M3 Competition has won. But the telemetry says otherwise. The Model 3 Performance needed 11.72 seconds to complete the standing quarter-mile, crossing the line at a speed of 114 mph (184 kph). The M3 Competition was 0.13 seconds slower to the finish line, even though its top speed was higher, at 124 mph (200 kph).

For the second run the Tesla is off to a much better start and this time it has a firm grip on the race. It managed to improve its quarter-mile time by 0.04 seconds, while its opponent crosses the finish line 0.19 seconds later. For the last test of the day, we get to see a rolling start procedure. Both drivers engage in a wide-open throttle battle as soon as they hit 37 mph (60 kph). It's close this time, but the laws of physics once again favor Elon's creation. 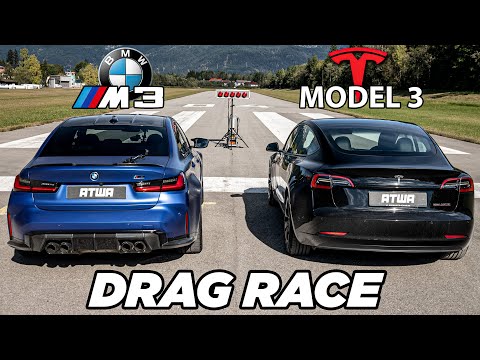