Ionut Ungureanu
It was 1902 when GMC started making trucks and to this day not many other car makers are able to compete with the company’s popularity in US. And what’s the next thing our country loves more than trucks if not football. Put them together and you get a jackpot, at least that is what folks over at Detroit believe since they have 600 vehicles rallied for this year’s Super Bowl.
1 photo
While the Super Bowl car advertorials reach the market one by one, the Detroit-based truck maker has been busy preparing the event itself since GMC is the official vehicle of the NFL. This year the company has teamed up with Emmy award-winning TV host Jenni Hogan who will be providing all-access updates and behind-the-scenes coverage of exclusive events throughout the Super Bowl weekend.

According to GMC’s press release you can consult below, she will be aboard a 2015 GMC Yukon XL Denali turned into a mobile studio, where fans will join the ride through the football event of the year.

Hogan will report form unexpected locations around the Phoenix area, interviewing athletes and celebrities from the red carpet, attending private parties and giving the play-by-play from University of Phoenix stadium during Super Bowl XLIX.

GMC brought the big guns for this event, since the company’s presence will be through no less than 600 vehicles supporting the game’s activities, things such as transporting celebrities and VIPs, providing shuttle services, and being put up for display at the NFL Experience Engineered by GMC.

The pop-up showcase opened Saturday with the unveiling of 32 white diamond 2015 GMC Yukon Denalis, each adorned with an NFL team logo on the hood. The reveal was hosted by ESPN’s play-by-play announcer Mike Tirico. Fans will have the chance to get a closer look at various interactive displays and get player autographs. These and plenty of other activities were carefully handeled by GMC to make this a perfect weekend. 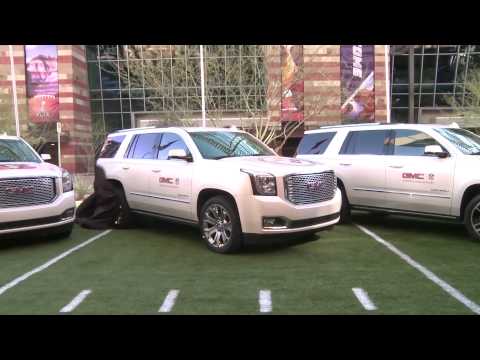