4 Ford Buzz Car Gets Excited When You Do, and It's Not Exactly Discreet About It

Ford Pits All Of Its Sports Cars Against Each Other

The Motorland race circuit near Barcelona, Spain was the scene of a not-so-often seen race between eight Ford models, driven by eight Ford Chip Ganassi Racing Team drivers. The video, which was shot during a tight four-hour window of the pre-season Ford GT race car tire test, was filmed using three camera crews, a drone, and 16 GoPro cameras, as well as a custom-built Ford Fiesta ST camera tracking vehicle.
13 photos

“It was a hilarious shoot. Eight racing drivers all given a car to go flat-out in for a race. Anything could have happened, and it almost did! It was amazing to be one of the first people to drive the all-new Ford Fiesta ST, one of the most popular cars in the world, and it handled like a dream,“ said Harry Tincknell, one of the eight drivers.

The race was started by each car at intervals, but that didn't count for much, Towards the end of the race, the cars begin piling up together, each making it across the finish line within few seconds of each other. The showdown was won by the Ford GT race car, having lapped 1 minute 40 seconds, and lost by the Ford F-150 Raptor, which finished last with a time of 2 minutes and 30 seconds.

“Obviously driving the Ford GT was great around Motorland. You can clearly feel, and it is obvious to see how fast this car is. Driving the Ford GT at the limit is very special. The car is a work of art!” said driver Olivier Pla about his vehicle. 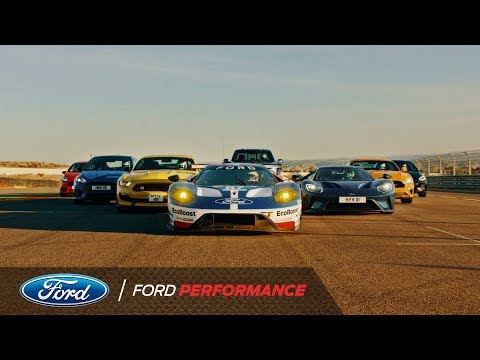