1 Ferrari Roma Spider Spied for the First Time, It May Have a Soft Top

4 Digital Ferrari Roma Lusso Is No GTC4Lusso Heir, but Rather a 'Basic' Shooting Brake

Alexandru Boghiu
This is not the first time an enthusiastic Nissan GT-R takes on a Ferrari SF90, hoping to get away with it. But you could say the Nissan is punching above its weight class this time around.
9 photos

What’s even more impressive is the fact that the car hasn’t gained any weight during the process, meaning it tips the scale at 1,750 kg (3,858 lbs).

The owner also replaced the standard brakes with carbon ceramic ones for more stopping power. Not to mention that, even with all the tuning, it costs around £90,000 (around $104,000), which is still significantly less than the Ferrari. Speaking of which…

Both these two monstrosities pack quite the punch; they look and sound amazing, but the GT-R is louder and angrier, spitting flames and coughing fumes (which at one point even caused a bit of an issue with a transmission warning light popping up, but apparently the car “walked it off” and fixed itself).

But we all know there can’t be two winners, so which one will take the crown?

The only thing you need to know is that both contenders had amazing launches. More than once. As for who got the first place? I won’t spoil anything for you, but I think you’ll enjoy finding out yourself by checking out the video below. 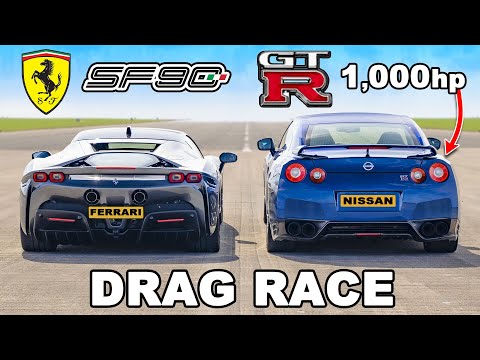