1 Mazda5 and Mazda6 2% More Expensive in the UK 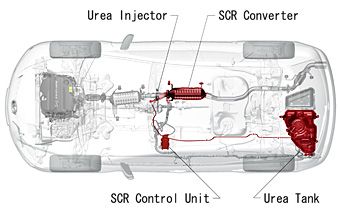 Mazda becomes the first Japanese automaker to develop an urea selective catalytic reduction (SCR) system that reduces the amount of nitrous oxides (NOx) generated by diesel exhaust gases. Several other automakers have already designed their very owns systems, including Mercedes, with some of them also installed on mass-production models. The new technology will be launched together with the new facelifted Mazda CX-7 that features a new clean and fuel-efficient 2.2-liter turbo diesel engine.

You're probably wondering what's with this so-called urea system. Well, this is one of the latest innovations created by car manufacturer to reduce the engine emissions without modifying the engine per se. The whole assembly is basically based on aqueous urea sprayed directly into the exhaust gas flow which reduces emissions with the help of a chemical reaction.

While other similar technologies where previously based on fuel to reduce the amount of NOx produced by diesel engines, thus improving the fuel economy, Mazda's urea SCR uses a separate aqueous urea storage tank that provides the harmless substance whenever it is needed.

Several other manufacturers have until now developed similar system but, due to the large dimensions of the system and of the tank, installing them on passenger cars proved to be fairly difficult. Nevertheless, Mazda says its unique technology is smaller and more efficient than others', partially thanks to the new clean engine.

The engine produces lower NOx which means the SCR needs a smaller amount of aqueous urea and thus, a smaller tank is required.

Mazda says the engine, along with the aforementioned technology, is complying with the Euro V regulations and is expected to reach the market this year.