Introduced for the 2019 model year, the fourth-generation Silverado 1500 will receive a mid-cycle refresh in a matter of months. The Detroit-based automaker is currently testing prototypes in the Rockies, and Roman Mica of The Fast Lane had the opportunity to get up close to three of them.
6 photos

Benchmarked against the 2021 model year, the facelifted pickups are camouflaged like there’s no tomorrow because GM intends to wow us with the interior makeover. The Silverado 1500 and Sierra 1500 will both get fancier dashboards thanks to the adoption of Super Cruise, which is a pompous way of saying Level 2 driver-assist features for $15 per month with an OnStar plan or $25 per month on a standalone basis.

The interior will be further spruced up with a small camera on top of the steering column and that will determine if the driver pays attention to the road when the semi-autonomous driving nannies are turned on. The steering wheel is going to change a little bit as well thanks to a green-lit bar on the upper part of the rim that will prompt the driver to be alert at all times.

Both the Chevrolet- and GMC-branded trucks are believed to adopt a digital instrument cluster to the detriment of traditional gauges, and it’s pretty obvious that GM will improve the infotainment system as well. As far as the exterior is concerned, you can expect both pickups to receive a sharper grille and bumper up front while the rear end will remain mostly unchanged.

Another big update for the 2022 model year is the Silverado 1500 ZR2 or Silverado 1500 ZRX, depending on who you ask. Whatever the newcomer is called, this off-road trim level has been captured on video while benchmarking against the F-150 Raptor and the mid-sized Colorado ZR2.

And finally, the RPO code LV3 4.3-liter V6 engine will be phased out according to a leaked presentation from General Motors. With it, the biggest of the Big Three in Detroit will also discontinue the Hydra-Matic 6L80 automatic transmission in favor of the more efficient 8L90 tranny. 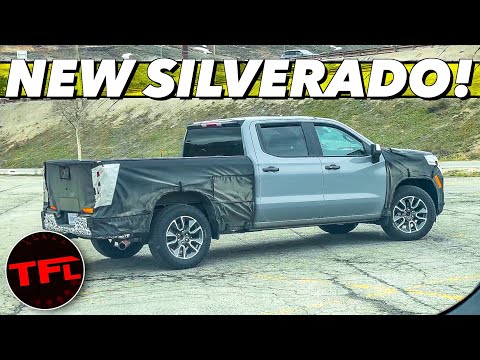