Drifting a Renault Clio V6 Is Harder Than Expected

Because of the Ford Focus RS, hot hatchbacks have slowly but steadily adopted fancy all-wheel-drive systems with selectable rear-wheel drive. The Blue Oval had the audacity of calling this feature Drift Mode because 70 percent of the 2.3-liter EcoBoost's torque goes to the rear axle.
10 photos

A whopping 14 years before the Rally Sport-branded Focus, the crazy peeps at Renault Sport converted a front-engined and front-wheel-driven hatchback into the Clio V6. Introduced in 2001 and retired in 2005, the mid-engined and rear-driven layout made it the craziest hot hatchback of that era.

The Phase 1, as the 2001 to 2003 model is called, packs 227 horsepower and 221 pound-feet (300 Nm) of torque from a 2.9-liter powerplant, the ES/L engine developed in collaboration with Peugeot and Citroen. For the Phase 2, Renault managed to improve the horsepower rating to 252 ponies.

Inspired by a competition model, the road-going variant is reminiscent of another crazy hot hatchback from the automaker’s illustrious past. I’m referring to the Renault 5 Turbo, which numbers just under 5,000 examples. Including the track-only model, the Clio V6 numbers just under 3,000 units.

Grandpa and the newcomer were both developed to corner like nothing else on twisty mountain roads, but on the other hand, they’re hard to manage in terms of controlled oversteer. Even on a very wet surface, Autocar’s Matt Prior has trouble correcting the Clio V6 because he runs out of steering lock.

The momentum, short wheelbase, and weight distribution come together to spin the car, and it’s easy to understand why the V6-engined Clio reacts this way. “As soon as you get on the power, around it comes,” said Matt. “Will it drift? Yes, it will. The question is, are you good enough to stop it drifting?”

A modern-day classic, the Clio V6 used to retail at £25,995 when it was brand-spanking new. That sticker price converts to £44,105 after we adjust for inflation, and that figure converts to $60,980 at current exchange rates. In other words, the legendary Clio V6 used to be more expensive back in the day compared to the 2021 model year Mercedes-AMG CLA 45 Coupe. 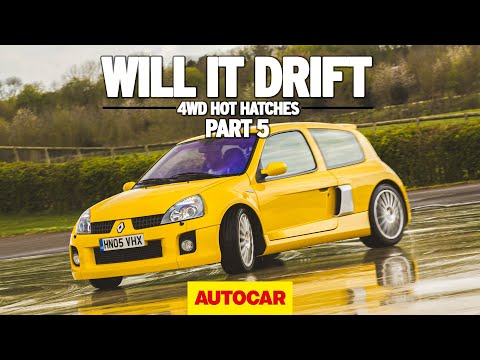