Renault was on the verge of promoting new vehicles in its lineup, and its testing ground was the highly competitive Indian market, where it chose to launch the Kiger at the beginning of 2021.

Despite a bad 2020, with a world affected by the pandemic situation, Renault relentlessly launched new models either under its brand or under the Dacia, Nissan, Infiniti, or Samsung ones. The Kiger was introduced on the Indian market as a sub-compact crossover using the CMFA+ platform.

Renault's designers made a completely new design language for the French brand, and they tried it on the market. The Kiger featured two distinct areas separated by a black, horizontal slat in the front bumper at front. Above it, Renault installed a wide grille with narrow headlights and LED daytime running lights. Its raked A-pillars made the crossover looks sportier. The carmaker made a floating-roof design over the C-pillars, with a dark area, following the same design style from the Nissan Micra.

Inside, the Kiger featured a 7" TFT display in the instrument cluster and an 8" touch-screen on top of the center stack for the infotainment system. Some buttons and controls were similar to those installed on the Dacia or other Renault vehicles. Its interior dimensions showed that the car offered an adequate room for four average-sized passengers. In the back, the split-folding bench allowed a trunk volume increase from 405 liters (14.3 cu-ft) to 879 liters (31 cu-ft).

Under the hood, Renault installed a choice of two engines with the same 1.0-liter displacement. The naturally aspirated version provided 72 hp, while the turbocharged one added 28 more ponies. 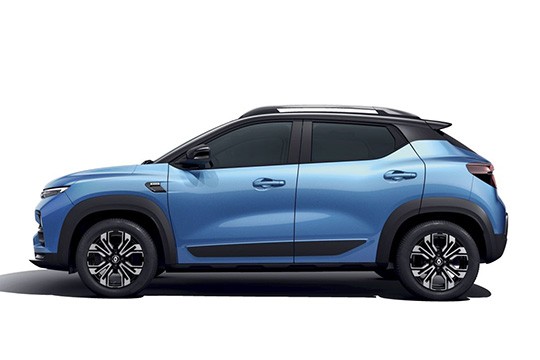