1 The Futuria Sports + Spa Motorhome Comes With Garage and Jacuzzi, Your Own Nightclub

3 Koda Float Redefines Year-Round Waterfront Living: Minimalist Inside and Out

5 Opulence Is the Volkner Mobil Performance S, the Ultimate Motorhome
Car video reviews:
Up Next

Comfort is relative when camping, and luxury almost non-existent. Camping’s younger and fancier sibling, glamping, is mostly for the younger generation, as well as for travelers who still want to enjoy the great outdoors but without giving up the comforts of home.

The Hippie Caviar Hotel Is a Dreamy, Retro and Luxe Electric Campervan

Somewhere in between is the Hippie Caviar Hotel, an official Renault concept campervan teased earlier this month and revealed in official photos just now. The actual debut of the concept is yet to take place: it’s scheduled for August 27, at the 2021 Düsseldorf Caravan Salon. While Renault never said anything about actually producing this camper, it is an excellent fit for our Travel Month, when we’re looking at the best and most awesome vacation vehicle, whether real or concepts.

The Hippie Caviar Hotel is a campervan that tries to bring together contrasting lifestyles: hippie and luxurious. In theory, it’s a camper that is both low-maintenance and premium, compact and easy to operate, and a complete solution at the same time. Inspired by the 1977 Renault Estafette van and meant to invoke the sense of wondrous freedom of the hippie age, it’s meant for the digital nomad and the traveler who is sick of travel restrictions and is itching to get out of the city. However, since most city-dwellers are not ready to ditch city comforts for a life on the road, this is a solution of compromise.

In keeping with the “hippie” part of the name, the Renault campervan comes in a very dated color scheme. Based on the upcoming Renault Trafic, the electric van is painted in dual colors with a contrasting interior. Materials are premium: wool and real exotic wood, linen and plant-based stuff, because hippies are mindful of the planet.

The cabin is separated from the rear end, stylish but decidedly retro. The back is actually a generous lounge that can double as a bedroom for two adults. Renault ditches the usual kitchenette, using all the space to install a modular bench that can become, when needed, a 145 x 195-meter (4.7 x 6.3-foot) bed or a tanning lounge that slides out onto the tailgate. In the latter case, the tailgate and the integrated draperies provide shade and privacy. Meanwhile, the rooftop terrace, which comes with folding table and side railings, and removable backrests, is perfect for those lazy summer days and nights.

The cabin also provides ample storage space, and is decked in contrasting colors, of the kind you’d expect in any period-correct ‘70s van: yellows, washed-out greens and various shades of mostly-muted browns. The result is a clearly hippie and definitely chic space that’s perfect for weekend getaways. At most, since you have no place to cook, eat or, you know, use the toilet.

Here is where the “caviar” comes in: since this is a concept vehicle and there’s not much that can put a damper on a dream, Renault imagines drone deliveries as the solution to these daily tasks we must perform in order to stay alive. The campervan would be smart and, on the app, travelers could order whatever else they needed ahead of time, for delivery upon arrival.

Renault calls this a “logistics container” and it could include anything from e-bikes and e-bike stands and chargers, to barbecue grills and paddleboards, a toilet (and shower) or kitchen module, patio furniture and even a rear deck. Depending on how long you’re thinking of staying and the kind of amenities you want to enjoy during that time, the Hippie Camper Van can turn into a proper glamping resort. It would still be cramped, alright, but the idea is that you wouldn’t have to haul all the extra stuff around: you pack your van and head out, and Renault handles the rest.

The same virtual concierge could handle cooking for you, so you could go without a kitchen and the fuss of planning, cooking and the washing afterward. As the video at the bottom of the page shows, Renault imagines a room service-type of service, where you simply go online, pick one or more items from the menu, and have them delivered right away to you by drone. This could work even today at campsites close by, but there goes spontaneity out the window.

The Hippie Caviar Hotel campervan has little in common with the vans that have, over the past two years, turned #vanlife into such a worldwide phenomenon. But it is a beautiful dream, one that allows even the most inveterate city-dwellers to give a shot at van life, at the very least. Until the first bug zooms in. 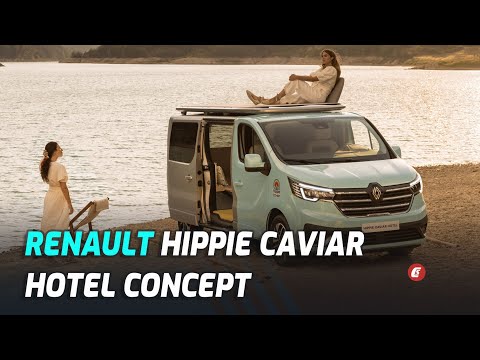