Heralded as a game-changer, although it’s not the first at U.S. dealerships to spice up the revived compact truck market, the 2022 Ford Maverick is another Blue Oval darling for the masses. And people have taken notice.
12 photos

Introduced as a direct (and, for now, exclusive) response to the 2022 Hyundai Santa Cruz, Blue Oval’s version of the bite-sized pickup truck has elicited a lot of interest from consumers. That quickly translated into tens of thousands of reservations, and it’s everyone’s guess if Ford is going to be able to deliver them all.

Remember, there’s a chip shortage affecting the automotive industry and there’s also the belated 2021 Bronco debacle to account for. For now, people are still left wondering how the 2022 Maverick looks like in real life – and, luckily, numerous sources are catering to the urge.

Spotters are prime among them, but it seems that even official venues have jumped into the fold. So, the good folks over at 80sAirwaves channel on YouTube have prepared a neat feature (video embedded below) of a series of shots that were shared with them by the Terrebonne Ford Lincoln dealership in Houma, Louisiana.

Better yet, these cater to a specific category – the one that occupies its thoughts with various comparisons between the Detroit company’s lineup of trucks. This time around, the mighty F-150 isn’t the star alongside the 2022 Maverick. Instead, it’s the middle brother, the Ranger, in a cool shade of blue and dressed up with the STX appearance package.

That one is offered on the Ranger XL for just $995 MSRP and comes with bespoke 18-inch black wheels, SYNC 3 and an eight-inch screen, and unique interior features. There’s also the option to bundle it with both 4x2 and 4x4 versions, SuperCab or SuperCrew configurations, and the FX2 / FX4 Off-Road Packages.

No worries, the 2022 Maverick is an opponent to match. Starting with the cool Cyber Orange color that provides a great contrast against the deep blue of the larger Ranger, even on a rainy summer day. Additionally, it’s a top-of-the-line Lariat we are dealing herewith. That would be a model that stands tall as the flagship version of the series and kicks off at $25,490 with the hybrid engine and $26,575 when packing the 2.0-liter EcoBoost (plus an additional $495 for this trendy color). 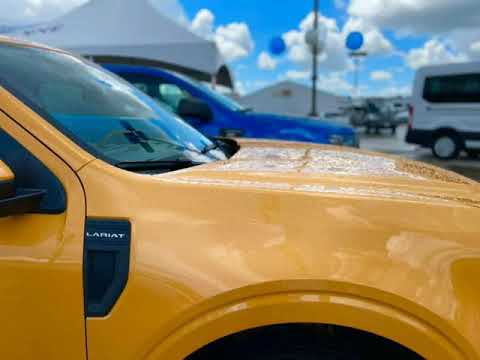