3 The Cupra of SEATs Would Gun for the BMW M4 Coupe, Needs a Solid Name

4 Too Bad It's Not an Exciting Car, or This Cupra Born Pic Would've Been a Great Wallpaper

Two years ago, CUPRA teamed up with De Antonio Yachts to build the D28 Formentor. Now, the two brands have once again collaborated, and the result is called D28 Formentor e-Hybrid. It is the first electrified yacht from De Antonio, and it builds on the company's relationship with CUPRA.
10 photos

The D28 Formentor e-Hybrid is named after the Formentor, which is the first model that was designed and developed for the Spanish brand. The folks over at De Antonio Yachts kept the existing engine, which developed 400 metric horsepower, and added two 15 kW electric motors in the mix.

The two 15 kW electric motors are retractable, and they create a hybrid system with the existing power plant. The D28 Formentor is capable of running in 100% electric mode, which is best used in lakes or restricted harbors. In the latter two situations, the yacht can travel without any emissions, as well as without making any engine noise.

The makers of this hybrid yacht have not mentioned the capacity of the battery that delivers energy to the two retractable electric motors. Since the units are retractable, they should not affect the vessel's ability to accelerate.

The first showboat made by De Antonio Yachts in collaboration with CUPRA was capable of reaching a top speed of 40 knots, and this one has the same powertrain, so it should be good for something similar.

The team at CUPRA worked on the design of this yacht with the Barcelona-based specialists, and the color palette has a new shade available, called Graphene Grey, and brought from the CUPRA lineup. The latter is meant to add a new character to the vessel's design.

For maximum optical effect, the exterior is matched with a synthetic teak deck, along with gray upholstery for all the seats. The yacht comes with an aggressive, yet minimalist design that is meant to evoke the automotive brand's character. 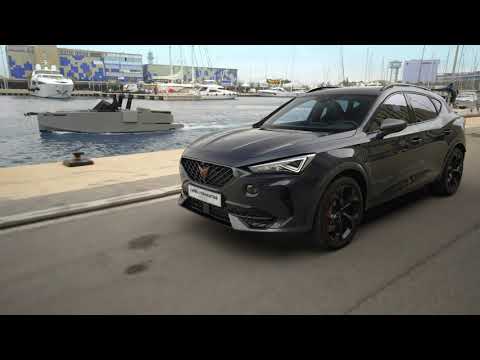