The Cupra Born wants to be the sportier version for that model in the Spanish brand lineup.

The German carmaker went through hard times during the Dieselgate emission scandal. Soon, its management understood that even if the diesel engine didn't die, the car-maker had to come with a new electric vehicle, either as a super-mini such as the Seat MII or Volkswagen up! Cupra was the sportier brand that evolved from SEAT.

The designers took their inspiration from the SUV-coupe trend, which was spread worldwide with the introduction of the BMW X6 in 2008. Cupra was born as the sportier version for Spanish carmaker vehicles, but it evolved into a distinct brand that offered a few models which were different than the ones sold under the SEAT brand, and the same went with the Born model. The front part of the car featured a short hood with no grille above the bumper since the car was electric. A grille was installed on the lower apron to cool the batteries and the motors. In the rear, the raked tailgate followed the same design cues as the Volkswagen iD4, built on the same platform.

Cupra installed a simple dashboard in a minimalist style concept. The standard 12" infotainment unit was placed over the center stack. Another TFT screen was used as an instrument cluster. Its cabin offered room for five, with real room for three passengers in the back thanks to its flat floor.
At the launch, SEAT offered a choice of three electric motors ranged between 150 hp and 231 hp. The carmaker provided three battery packs ranged between 45 kWh and 77 kWh, which allowed the vehicle a range of up to 540 km (335 miles). 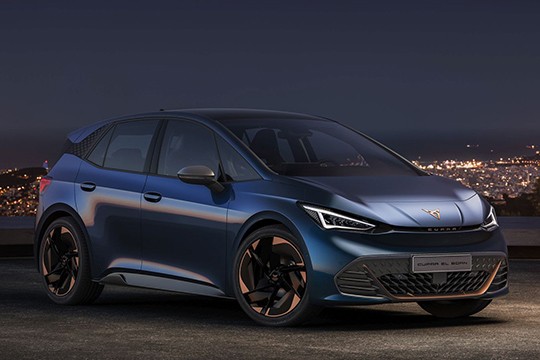 2 Too Bad It's Not an Exciting Car, or This Cupra Born Pic Would've Been a Great Wallpaper

5 Price Released for Cupra Born, Matches That of the Range-Topping Tesla Model 3