1 C7 Chevy Corvette ZR1 Drags R35 Nissan GT-R, Grudge Race Is As Close As It Gets

2 Cadillac CTS-V Wagon Drags Turbo Pontiac Trans Am, Gets to Show Who's a Sport Boss

Although it’s typically easy to highlight the usual suspects in a drag racing crowd, experience teaches quarter-mile fans to be patient and always on the lookout for surprises. So, here goes another one.
22 photos

A belief that one knows everything about cars is something that won’t survive even the tamest session of quarter-mile dragstrip racing. So, it’s best to go to such events with an open mind. And, thus, marvelous things will happen... sooner or later.

Here’s another example from the good folks over at the Drag Racing and Car Stuff channel on YouTube, who are a bottomless reservoir of straight-line wisdom. Sure, one can imagine that cool things will happen when a Dodge Challenger SRT Hellcat lines up for the challenge. Especially if the roster of foes is quite eclectic.

And the reason we shouldn’t judge a quarter-mile pass by its covers is that one can always encounter the element of aftermarket surprise. We’re pretty sure this feisty Challenger hides a few upgrades under the crimson and black paintjob, although no details have been forwarded by the D.R.A.C.S. crew on this occasion.

Never mind because the ETs give us a better perspective. So, the first skirmish is against an all-black fifth-generation Pontiac GTO. It’s one for the warmup, it seems, as the Hellcat gaps its opponent with the slowest time seen in the video (embedded below). So, it’s a 10.16s victory against the GTO’s 12.46s pass.

Next up comes a sixth-generation (F30) BMW 3 Series to try and bridge the production time gap with the SRT. But the Challenger is relentless, with yet another fast reaction time and the battle ends with the expected result: 9.91s versus the German’s 12.38s run.

Last, but certainly not least, comes a second-generation Camaro. And this is where it all heats up, as expected. The Challenger driver seems to know that very well, as the wheelie Chevy proves a formidable competitor. But in the end, it was the Dodge’s red light that secured the win for the Camaro, not the ET. 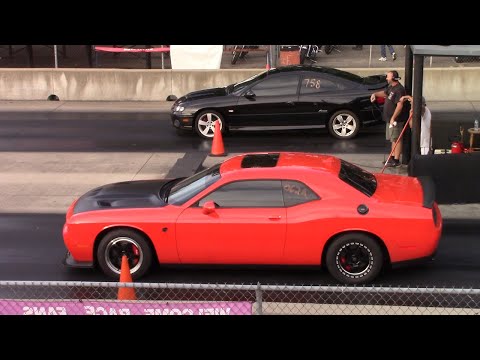