3 Jagermeister Dodge Viper Wrap Is a Shot of Adrenaline

Wrapping your car isn't something new anymore - in fact, it's becoming so mundane that you really need to think about something special if you plan on making your vehicle stand out.
9 photos

Some people simply put a protective film over the paint just to keep it in tip-top condition, thinking about the extra money they would make when selling it. Others just want to change the color and don't want to go through the trouble of actually painting it. But then there are those who take advantage of the nearly unlimited possibilities that wrapping offers and come up with the craziest designs.

We've seen plenty of them over the years, some even applied to Tesla vehicles. There was that Model X with a cow skin that just felt so appropriate, and more recently we've shown you a Model S with a dirty (literally) Martini Racing legendary livery that seemed so out of place on an electric vehicle.

Now, though, we have something completely special. If the human character in the "Simon's Cat" animated series drove a Tesla Model S, this is what it would look like. Only this yellow thing rolls its wheels in the real world.

Burnie Burns, the actual owner of the car, really liked his Tesla. But he bought a gray one, and soon enough he came to realize that there ware lots of them on the road. Instead of freaking out, he decided to use some lateral thinking, with a little help from a pocketbook made by Jump from Paper.

The wallet was designed to look as if it belonged in a cartoon, with bright colors and broad black paintbrush strokes. Burnie liked that look, so he decided to do the same thing with his electric sedan. He went to Graphics Guys for help and sometime later, his Tesla was all done.

As one of his friends in the video says, it looks as though it came out of the clip for a-ha's "Take on Me" '80s hit song, only that was all black and white. Another good reference is the Borderlands video game, the one Burnie mentions as another source of inspiration.

Whatever it makes you think of, he sure managed to make the car stand out. Too bad the headlights and wheels can't be modified as well because as they are right now, they do take away some of the effect's eeriness. See for yourself in the video below. 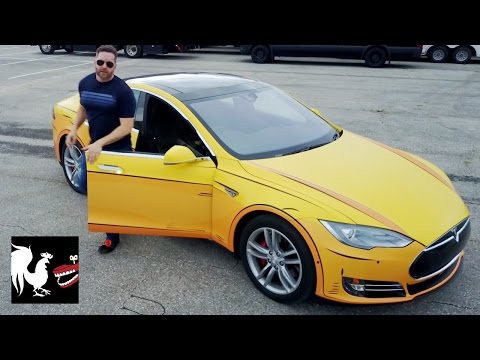