5 BMW S54: The M3’s Last and Most Impressive Naturally Aspirated Straight-Six
Car video reviews:
Up Next

One of few M powerplants that were not related to a regular production BMW engine, the S65 was an engineering masterpiece that gave the E90-generation M3 some serious muscle.

BMW S65: The M3’s First and Only V8, and Five-Time International Engine of the Year Winner

While the first member of the M3 lineage hid a de-tuned, motorsport-spec four-cylinder under its hood, the next two generations reverted back to the inline-six formula that made the Bavarian manufacturer famous.

By 2002, as the E46 range was becoming obsolete, and it was time to create a replacement. Codenamed E90, E91, E92, and E93 (depending on the body style), the thoroughly modernized 3 Series took about 30 months to develop. The sedan and wagon were introduced in March 2005, followed by the coupe in 2006, and the convertible one year later.

While customers were already enjoying the new 3er, behind closed doors, M engineers were working on a high-performance version that would turn out to be very different

Although the E46 M3’s S54 straight-six (also fitted to later M Roadster and Coupe versions) was a huge success, the Motorsport division decided to break with tradition and build a rabid V8.

Some have speculated that the engine traced its roots to the E39 M5’s S62, but actually, the M3’s first and only eight-cylinder was loosely based on the E60 M5’s screaming S85 V10 released just a couple of years earlier.

It featured a sturdy block constructed out of eutectic aluminum and silicon alloy by the company’s Landshut foundry. At the time, this facility was also producing blocks for the S85 and BMW’s Formula 1 engines using the same basic architecture.

Other high-performance features included eight individual throttle bodies, ionic current knock sensing, a high-performance Siemens MSS60 ECU capable of performing more than 200 million calculations per second, and an innovative Brake Energy Regeneration system. No, it had nothing to do with the similarly-named system employed by EVs. It was devised to reduce the alternator’s charging rate during acceleration, enabling maximum power delivery, and only allowed it to operate at full capacity during braking and decelerating.

To reduce weight and improve reliability, engineers also designed a new lubrication system. Unlike the S85 which used a three-pump dual semi-dry-sump, the V8 got a simpler, yet equally effective single sump with two electrically operated scavenging pumps.

Able to rev up to 8,400 rpm while delivering a goosebumps-inducing growl, the epic powerplant could spit out 414 hp and 295 lb-ft (400 Nm) of torque, figures that made it the most powerful engine ever fitted inside a road-legal M3.

It got even more capable in the 2010 track-oriented M3 GTS. Enlarged to 4.4 liters and upgraded with a lightweight titanium exhaust system, it could now make 444 hp and 325 lb-ft (440 Nm) of torque.

Regardless of the version, the S65 was an instant hit with both the automotive press and BMW’s most demanding enthusiasts. With plenty of power and an ample torque curve, it turned the E90 M3 into an absolute beast.

It was such a terrific engine that it earned the International Engine of the Year award for the 3.0-to-4.0-liter category five years in a row, from 2008 to 2012.

Even if it was eventually replaced by a potent turbocharged inline-six once the F-Series M3 was introduced in 2014, the S65 remains one of BMW M’s best engines.

Although some issues have arisen with its rod bearings, valve cover gasket, or idle control valve, it is generally regarded as a very reliable unit. Moreover, it’s also pretty tuning-friendly. With minor modifications such as an aftermarket exhaust system, a high-flow air filter, and an ECU remap, 500 to 520 horses are easily attainable. For those who want more, a supercharger kit along with stronger aftermarket conrods and cams can push the output figure well into the 700 hp range.

In the YouTube video below by Alex Gray, you can enjoy the awesome sound that this epic V8 produces with both stock and mudded exhaust systems. 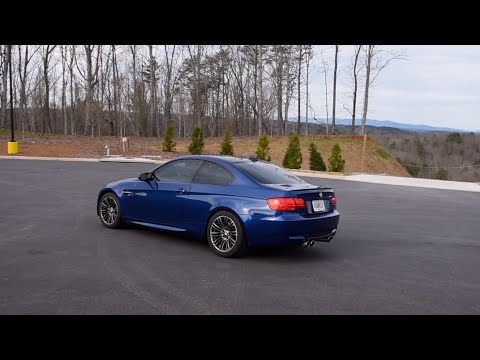