1 2018 World Car Awards Nominees are Out

Kia really deserves to pat itself on the back for making the Stinger GT. It's fast, looks good and is cheap in comparison to its German rivals. However, the car isn't perfect, and most reviews point out one major flaw: the way it sounds.
1 photo
Six-cylinder engines used to be seen as the poor man's alternatives to the V8. However, even exotic cars use them nowadays - Alfa Romeo Giulia QV, Ford GT, and the Acura NSX.

Most of them sound decent, but the 3.3-liter twin-turbo V6 in the Stinger GT isn't that happy to crackle and pop. Because the unit is shared with luxury sedans from Genesis, we expected Kia to make some radical exhaust tuning. But they didn't, and the BMW M140i reveals just how bad it is in the exhaust sound comparison below.

The M140i is old news. It will probably be discontinued in about a year, and it's not even a real M car, even though it wears the badge. Looking at with the engine shut off, you' think that it's just a regular family hatchback with a double exhaust. However, the BMW inline-6 3-liter makes a far more pleasant noise and also seems happier to rev. It's worth keeping in mind that the Kia also has the optional bi-modal exhaust installed.

It's a shame this video doesn't include a drag race too. Kia recently boasted that the Stinger GT is faster than a BMW 6er and a Porsche Panamera. But we think the M140i would eat it for breakfast because it's got roughly the same power and over 300kg less weight.

Because the Stinger isn't an established hot hatch, there aren't any go-to aftermarket exhaust systems. You can't go to Akrapovic and pay them $3,000 to have your GT sounding like a Ferrari, not yet at least. But hey, at least to save money by not buying a German car. 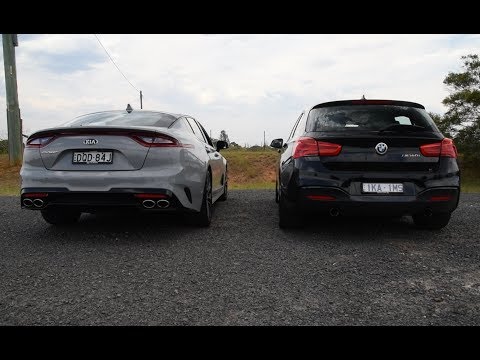