Kia unveiled the refreshed 2024 model year of the Seltos SUV at the 2022 Los Angeles Auto Show, upgrading the car's design and features.

Sharing its platform with Hyundai Kona, the Seltos was introduced on the market in 2019 for selected countries worldwide, but not in Europe. There, the more affordable SUV could've cannibalized its bigger brother, the Sportage. That decision stayed in place even after the introduction of the facelifted version, which happened in 2022.

Sporting a completely redesigned front fascia, the 2024 Seltos received a satin-silver trim between the grille and the hood. In addition, the LED headlights featured new vertical fog lamps integrated with C-shaped daytime running lights. The car also received a new bumper with sharper shapes for a more rugged, meaner look. Last but not least, the 2024 Seltos sported Kia's new logo.

Inside, customers were greeted with a high-tech interior, where the carmaker offered an option for two wide-screen displays: a 10.25-inch instrument panel continued above the center stack by a 10.25-inch for the infotainment unit. For lesser-equipped versions, Kia installed a new 4.2" instrument panel with digital gauges.

Another significant upgrade was made for the drivetrain, where the Seltos received an improved 1.6-liter turbocharged GDI unit that gained 20 more horses for a total of 195 HP (198 PS). 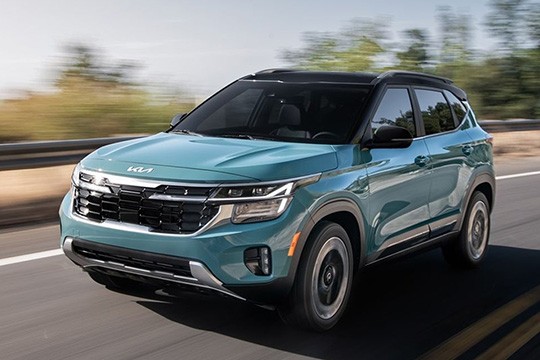