4 $50k Nissan Z Performance Drags Supra 3.0 and Mach 1, Turns Out Slower Than Both

Recently updated with the Competition Package that reduces weight and improves handling, the RS 5 is a quattro-equipped thriller with twin-turbo V6 oomph. With 444 horsepower and 443 pound-feet (600 Nm) of torque on tap, this fellow is much obliged to hit 62 miles per hour (100 kilometers per hour) in 4.1 seconds, on to 174 miles per hour (280 kph) on full song.
11 photos

The Sportback in the featured video is understandably expensive at 72,000 pounds in the United Kingdom, which is 89,850 at current exchange rates. It’s not a lightweight car either at 1,742 kgs (3,840 lbs), but on the other hand, the rivaling BMW M3 and Mercedes-AMG C 63 aren’t light either.

For this particular straight-line showdown, Mat Watson of carwow didn’t pick internal combustion-engined challengers. He opted for the zero-emission sibling of the 4 Series Gran Coupe, the i4 that everyone loves to hate for all the right (and wrong) reasons. Although the way it looks is hard to digest, BMW deserves a round of applause for the performance-oriented M40 version that costs a rather surprising 64,000 pounds (79,865 dollars).

The first all-electric model from the German automaker’s go-faster division should make the RS 5 Sportback tremble with fear in terms of power and torque differences, but on the other hand, bear in mind that we’re dealing with a weight difference of 473 kgs (1,043 lbs). Given this information, have a wild guess which is the quicker car in the standing quarter mile?

Spoiler alert: the Audi RS 5 Sportback and BMW i4 M50 both cross the line in 11.9 seconds, but the all-electric model still tastes the bitter taste of defeat. As for their performance from a rolling start and under emergency braking, be sure to press play and enjoy carwow’s latest drag-racing clip. 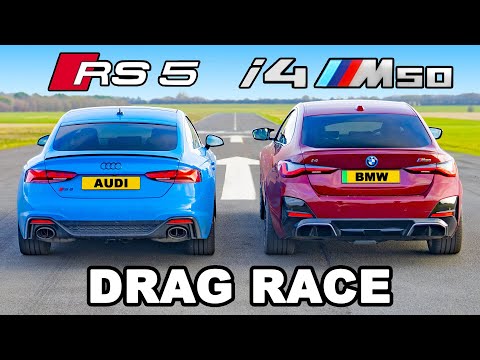