2 2019 Porsche 911 Speedster Has Delivery Miles, Up for Grabs in a Bespoke Yellow

5 This Is How a Porsche Taycan Turbo S Broke the Guinness Indoor Land Speed Record
Car video reviews:
Up Next

Today we've been assaulted by the humongous BMW grille in its EV form on more than one occasion, so let’s counterbalance the iX and newly previewed i4 with help from the metalhead slacker friends that like to have time-travel adventures and plain old fun. Actually, there’s no need for "Bill & Ted" Alex Winter and Keanu Reeves to jump forward in time because the future is already here, in the form of two Porsche Taycans.
42 photos

Of course, the German automaker doesn't mention the interesting connection between Winter and Reeves, or the fact that BMW had an important electric sedan release on this very day (which also happens to be Saint Patrick’s Day, by the way).

But we couldn’t help but link the dots ourselves because of the grainy resolution of the “Porsche Presents: Going The Distance” video feature that’s capped at 480p as if we’re back in 1989 all over again. Didn’t Porsche hear about the 2020 installment of the franchise? As for the i4, we just throwed in the 523-hp EV because it still doesn’t compare favorably to the muscular yet elegant lines of the Taycan sedan.

Never mind our own slacking thoughts (pun intended), because here’s the challenge faced by Winter and Reeves: drive the pair of Taycans on a single charge from somewhere in Santa Barbara to the Porsche Experience Center (PEC) in Los Angeles. It sounds simple enough, right?

Not quite, because a series of dares awaits them along the way. First up, from the 1:17 mark comes Tanner Foust in a 911 GT3 RS (no, it’s not the new one) for the Launch Mode trial. Next was Patrick Long, a Le Mans, Sebring and Daytona winner, which accompanies them on the hill climb inside the one and only 918 Spyder hybrid. Last but not least, at the PEC, an instructor was waiting for a quick drift lesson from the 5:23 mark.

Intrigued? Well, let’s watch the video embedded below and marvel not just at the qualities of the Taycan (it’s a marketing stunt, after all) but also enjoy two great actors who clearly know how to have a good time while goofing around. 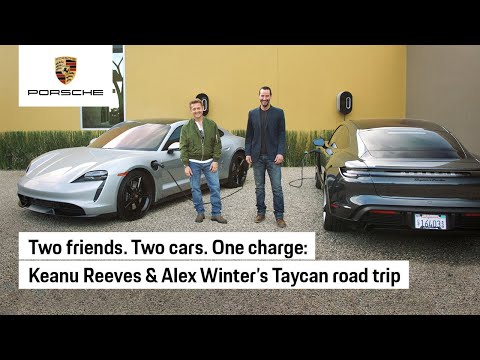