Silvian Secara
Unico Moto’s custom head-turner is precisely what some of you would call a “Franken-bike.”
21 photos

Three years have passed since Andre Frizzarini and Justin Andrew joined their forces to establish Unico Moto in Orlando, Florida. During this time, the young workshop undertook a total of six different bespoke ventures, all of which revolved around Ducati’s mechanical phenoms. It’s worth mentioning that each and every stage of the customization process is completed in-house – a remarkable feat for a lesser-known garage that’s basically just starting out.

Today, we’ll be looking at the most bewildering entity born on Unico’s premises, which should give you a clear idea as to what these folks are all about. Briefly speaking, this sexy thing (dubbed “1GP”) is the motorcycle equivalent of Frankenstein’s creature, using the repurposed L-twin powerplant of a 900SS and a Ducati Monster’s unmistakable trellis framework. The experts kicked things off by sketching their vision out on paper, then they used 3D-modeling software to create digital renderings.

Having been developed over the course of twelve painstaking months, the Duc in question does a great job at showcasing the extent to which these moto architects can go. After they had successfully mated the SuperSport engine to the trellis frame, the Unico team manufactured a unique air intake system that sports K&N inhalers. Interestingly enough, the air filters are placed in between the bike’s forks and gas chamber – a setup that you won’t get to see very often.

The standard clutch was discarded in favor of an aftermarket mechanism, which is encapsulated in a transparent K-Bike cover. At the exhaust end of the combustion cycle, you will spot handmade stainless-steel headers working their way up to a pair of custom mufflers. With these goodies installed, the crew added new mounting points on the frame to accommodate a Ducati 999’s fuel tank. As we glance rearward, we’re greeted by a suede leather saddle, and an angular cafe racer-style tail section with integrated LED lighting.

In the cockpit, we find adjustable clip-on handlebars from Woodcraft, sporting underslung bar-end mirrors, LED turn signals, and premium Domino grips, as well as aftermarket levers and switches. To wrap things up, Unico Moto’s specialists fitted Rizoma fluid reservoirs, while a set of CNC-machined rear-mounted Ducabike foot pegs were bolted to the flanks. Next, the whole ordeal was concluded with a plethora of thoughtful chassis modifications.

At the front end, a SpeedyMoto triple clamp is tasked with holding the Duc’s revised forks in place, and it’s accompanied by a high-grade Ohlins monoshock and a single-sided swingarm at six o’clock. As far as the predator’s footgear is concerned, the stock sneakers have been replaced with lightweight Kineo substitutes, wearing Pirelli’s esteemed Diablo Supercorsa tires. Last but not least, the finishing touches come in the forms of braided brake lines and tiny carbon fiber accessories. 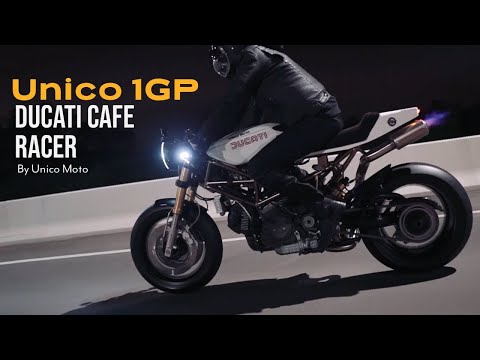