Home > News > Auto Motorsport
Dragos Chitulescu
At the beginning of the millennium, you'd rarely see a stock sports car managing to keep up with a fast bike. If you were driving a highly-tuned vehicle the situation might have been different. But these days, several machines can challenge a motorcycle and even win down the line. Is the Porsche GT2 RS part of that special group of cars though?
14 photos

Let's face it, the Porsche GT2 RS is a seriously fast car. You've seen it setting a Nürburgring record and you've seen it drag race a series of other fast cars before. But it's still a sports car, not a hypercar. It's not going to win a straight-line acceleration test against a Rimac Nevera or a Bugatti Chiron. So it is rather questionable if it can hold its own against a motorcycle such as the Ducati Panigale V4 S.

Sure, the bike's 1,103cc V4 engine only puts out 211 horsepower and 91 lb-ft (124 Nm) of torque, but think of the power to weight ratio. And then there's also the question of how much these two toys will set you back. The GT2 RS is almost 10 times as expensive as the V4 S. But today we're not here to discuss which one of these two offers the best bang for the buck. This is all about straight-line performance.

Chances are that the Porsche will jump into the lead at first, but the Ducati will most likely overtake it after a few seconds. Or won't it? Shockingly enough, they're neck and neck from the very first moment. And by the time the GT2 RS shifts into 4th gear, the Panigale V4 S is already extending its lead. Both the car and the bike are struggling with low traction levels, as it's quite cold outside. So both are slower than you would expect.

Looking at the telemetry results, the Panigale V4 S improved its quarter-mile time by 0.21 seconds. It was faster to 62 mph and 124 mph, and it had a trap speed of 148 mph (239 kph) for this run. Having warmed up the tires a bit before the second run, the GT2 RS also performed better. But better isn't enough. Maybe if it had an extra 150 to 200 horsepower, the outcome would have been different. They go at it a third time and we also get to see a rolling race, but there's just nothing the Porsche can do to win against the Italian superbike. 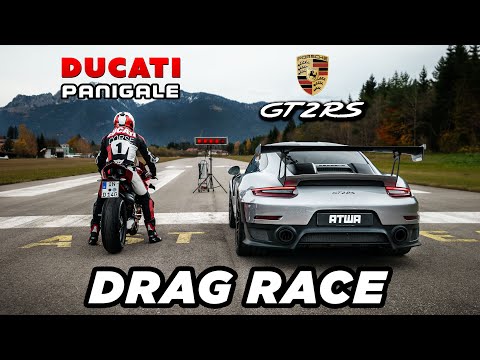