2 Verstappen Steals the Show in F1, Hamilton Pouts Away

Assetto Corsa GT86 Now Has an F1 Engine Inside, Is Good for Giggles Only

As I was playing Assetto Corsa today, I just remembered being in 1st grade, playing Andretti Racing, and marveling at how technologically advanced the game seemed at the time. It was 1998, and here I am, 23 years later, still playing racing video games, albeit at a different level.
8 photos

I can be pretty judgemental of people sometimes, but only in certain situations. For example, if someone tells me that he's a hardcore racing enthusiast, but only plays racing games from the "Need for Speed" series. On top of it, he doesn't want to hear about any kind of racing sims. That's when I am going to judge that person quite harshly. But I tend to get carried away when it comes to racing, be it in real life or Assetto Corsa.

I've been doing laps in the game ever since it was launched, and that's pretty much how I came to learn tracks like Spa Francorchamps and the Nürburgring Nordschleife. It's not easy being fast in this game, because this isn't "Need for Speed". You can't just approach a turn at 200 mph (320 kph) and use the walls to stay on track. And if you're playing for the first time, I suggest you start with a Miata, or something even less soliciting to drive, until you get the hang of it.

With Assetto Corsa 2 coming our way in 2024, you can't help but appreciate how the game still manages to attract so many players, 7 years after being launched. Thankfully, there are a lot of captivating mods for the game, developed by people all around the world. You can think of almost any racetrack or car, and someone's most likely built a mod for it so that you may enjoy playing it. And although I'm a big fan of the game, I haven't immersed myself that much into the world of modding, except for a few tracks and drift cars.

So I was quite delighted to discover the Assetto Corsa Car Tuner, which will pretty much allow you to put any wild idea into practice. And Jimmy Broadbent, a well know sim racer from the UK thought it would be cool if he'd start with a Toyota GT86, and then swap in a Formula 1 engine. If that sounds familiar to you in any way, it may be due to Ryan Tuerck's Ferrari-swapped GT86, or perhaps his JUDD V10-powered Supra.

Jimmy decided to start things off by bringing a 2021 F1 engine into the equation, which should be good for up to about 1,000 horsepower. He decides to set a lap time in the RSS Formula Hybrid, an equivalent to the modern F1 cars. He sets a fast lap of 1:09.419 around the Red Bull Ring, which isn't that far away from what real-life Formula 1 drivers can achieve. Right after that, he takes control of his F1-powered Toyota GT86.

And things can only unfold in one direction. Having upgraded just the powertrain, and nothing else on this car, it's bound to be overwhelmed by the performance increase. And with normal, road-going tires on it, there isn't going to be any traction either. Even the slightest throttle input results in wheelspin and excessive oversteer, but Jimmy seems to be laughing it off, instead of getting frustrated.

Things would have certainly been more complicated in real life, but game-wise, this car might have performed better if it had a drift set up on it, because it likes going sideways. After adjusting his driving style, he does manage to set a 1:50 lap time, but he would have probably been faster with the stock car anyway.

He later decides on switching to an older F1 engine, a V10, and that seems to be working out better for him. At the end of the day, he sets a faster lap time in the V10, and that has to be a clear sign that Formula 1 should bring back these engines and forget about the tiny hybrids of today! 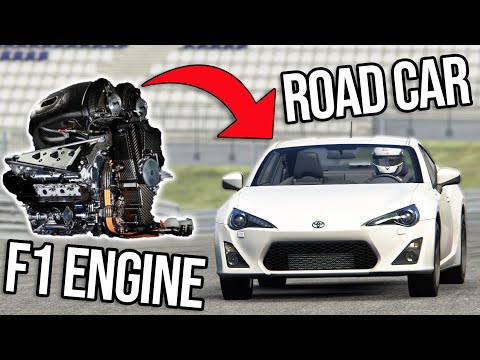