2 Ferrari F40 vs. Porsche Carrera GT Comparison Is an Ode to the Analog Supercar

Cristian Gnaticov
Regarded as one of the best Ferraris ever made, the F40 comes from an era when few people knew about ABS, and driver assistance systems had yet to be invented. Thus, whoever decided to put it through its paces needed to possess some proper driving skills.
11 photos

The analogue supercar is, sadly, part of a dying breed for many reasons. So, no wonder we get all hyped whenever we spot one doing something out of the ordinary, like this yellow example, whose owner decided that life’s too short to waste it on revving and fast takeoffs, so he set it loose on different surfaces.

From asphalt to gravel, and grass, this classic Italian model put on one heck of a show for the audience, who couldn’t get enough of it. And we totally get it, because when was the last time you saw such a vehicle behave like this? Probably not since the ‘TaxTheRich’ days, right?

Towards the beginning of the 8-minute long video, we can see the F40 do a smoky powerslide, before moving on to the start line of a UK hill climb. The camera then zooms in on it, as it moves from grass to dirt to show its tail-happy prowess, in a rally stage-like performance, and not long after, it took to the lawn to do a few donuts.

The F40 was the last Prancing Horse approved by Enzo himself, and it came out in time for the Italian company’s 40th anniversary, hence the name. 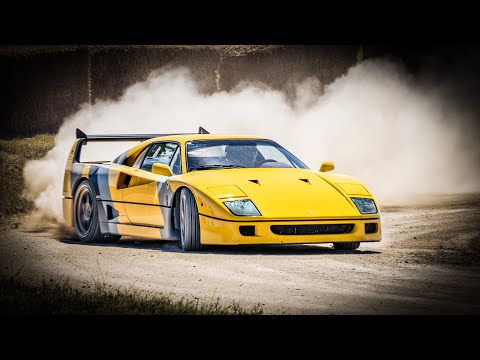