1 World's Fastest Bathtub Takes on the Green Hell, Needs 431 Seconds for a Lap

3 Assetto Corsa GT86 Now Has an F1 Engine Inside, Is Good for Giggles Only

This 1962 Chevrolet Impala Sports 24 Karat Gold Parts, a Little Surprise Under the Hood

Have you ever considered the pros and cons of living in the digital world? Is it worth letting go of your day-to-day life so that you can live a fantasy story? Well, it depends on who you're going to ask. For someone that has 0 chances of ever becoming an F1 driver, a computer or console is his only chance of living that dream.
8 photos

The sim racing community keeps growing and growing these days. While some people are spending up to $500 for a basic setup, I've seen people spending more than they would on an Ecoboost Mustang to get their virtual adrenaline dose. And let's face it, how else are you going to drive at Spa, Suzuka, and Monza all in one day? How else would you ever afford to crash a 787B at the Nordschleife, while doing 167 mph (270 kph) and get away with it?

That's the beauty of the digital world. You won't have to pay ludicrous amounts of money when crashing, you won't have to be afraid of dying, and you won't have to spend hours and hours flying to and from the venues you love. Doing a fast lap in a 787B at the 'Ring in Assetto Corsa isn't going to be remotely as exciting as driving a base-model Golf in real life on the same track.

But it's still plenty of fun if you're addicted to speed. And Jimmy Broadbent has made a name for himself by showing off his sim racing skills over the past few years. You just have to think of a video game franchise, and he's probably played it at least once before. But most often than not, he'll be honing his skills in Assetto Corsa. And we've talked about this topic before. It's easy to love this game for its seemingly endless modding possibilities.

Just recently, Jimmy test drove a Porsche-powered bathtub on the Nordschleife. Before that, he fitted an F1 engine to a GT86, which made for a lot of giggles. Right now, he decided to have more fun by creating a hybrid the likes of which you've never seen before. Starting from a 1990 Ferrari F1 replica, called the Formula RSS1990 V12, he wanted to see how an engine swap would affect its performance.

So out went the naturally aspirated V12 and in came the magnificent R26B. For all you rotor heads out there that will make sense. If you're new to the rotary world, or not as fanatic about it, that's the engine code for the Mazda 787B. Jimmy is a big fan of Rob Dahm apparently and who could blame him for that? Rob is looked at as sort of a visionary for rotary fanatics, and his projects have inspired people all around the world.

Looking at the specs of the 1990 F1 car, the 3.5-liter V12 was rated at about 680 horsepower at 12,750 rpm. The Mazda's 2.6-liter, 4-rotor engine was rated for 700 horsepower at 9,000 rpm. So, as Jimmy himself anticipates, this engine swap might not prove to be a complete failure. He tries it out for a few laps, then goes racing against the standard F1 cars of the day. With Crighton Motorcycles just launching their new rotary bike, here's to hoping that someone is going to build an F1-like machine with rotors instead of pistons sometime soon. 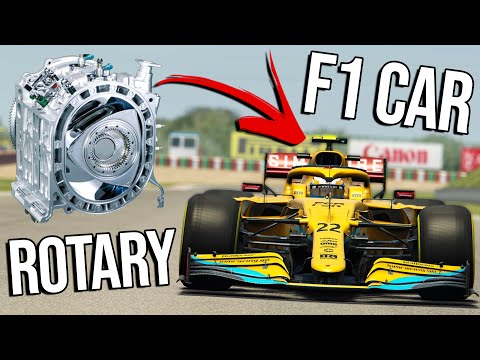