1 New Kia Ceed Version To Debut This Fall, Could Be GT-branded Shooting Brake

Mihnea Radu
The Stelvio is Alfa Romeo's first SUV, and it's competing with German rivals that have more pedigree. Here's how it stacks up against the Mercedes-Benz GLC-Class, which probably has the best badge in the segment.
3 photos

The differences were just as we expected but amplified. To be more precise, the Stelvio is way sportier than its rivals, but its reliability problems are not to be taken lightly.

While everybody is head-over-heels in love with the Stelvio QV and its Ferrari-tuned V6 engine, the 2-liter model is also imposing. The 280 horsepower and 306 lb-ft of torque are amplified by the Ti package's sportiness.

This $43,000 Italian stallion gets you all-wheel drive and an 8-speed automatic gearbox as standard. Reaching 60 miles per hour in 5.4 seconds and averaging 24 mpg, the Stelvio is competitive.

Auto Guide's Jodi Lai loves the way it drives and looks but is concerned about everything else. The Fiat Chrysler Alliance is known for making unreliable cars, and the Stelvio has already gone through some safety recalls. Not only does this tester have weird panel gaps, but the tow hook appears to have been used.

Jodi is also annoyed by the oversized padel shifters which block in stalks and the clunky infotainment system. Alfa Romeo could have done a lot more with the interior quality.

With the Mercedes-Benz GLC, there aren't any immediately visible flaws. It's well-built, which you expect when the biggest premium automaker develops an SUV over the course of several years.

However, the reviewer says she hates that Mercedes put four different stalks on the steering column. We also hate the silly shifter, but Daimler is stubbornly holding onto it.

Where the Stelvio is fun and engaging, the GLC-Class is comfortable, smooth and calm. We know that's exactly what customers are looking for in this segment. With 39 less horsepower, the German car is a full second slower to 60, if that's something you care about. 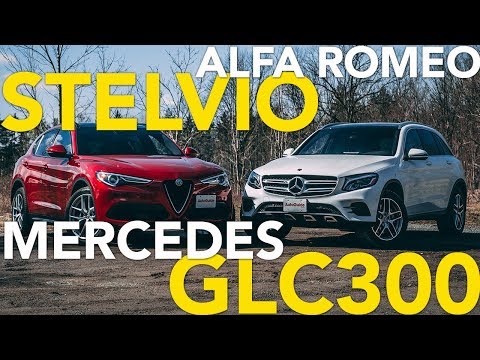