Alfa Romeo took the sports compact premium sedans by storm in 2015 when it introduced the Giulia, a car that took competitors by surprise and even made it across the ocean to the U.S. shores.

After failing to satisfy American customers back in the 90s, Alfa Romeo had to take a step back and focus on its European products. But when the new generation of the Giulia came on the market, it was time to cross the Atlantic ocean and roll its wheels onto American soil in 2015. But fast forward another seven years, and the Giulia received a new upgrade.

At the front, the "Trilobo" grille received a refresh, and the center triangle got a slimmer chromed trim. Also, it was shorter than the previous one, while the lower lobes were wider. Furthermore, the LED headlights sported angular-looking LED daytime running lights. At the back, the full LED taillights looked similar in shape but with a sharper lighting pattern. Last but not least, the Italian automaker included new light alloy wheels on the options list.

Inside, the most striking update was seen inside the instrument cluster, where a 12.3" TFT screen accessed all the vehicle information and parameters. In addition, the carmaker offered customization with three different layouts. Another unusual feature of the Giulia was the introduction of an NFT technology that could be included in the vehicle. This feature could keep track of vehicle's data and store it online using blockchain technology. 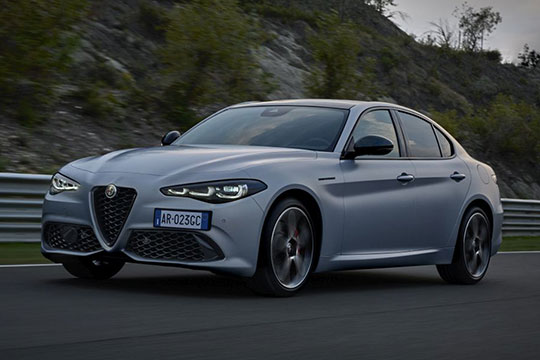