Sharing its platform with the Alfa Romeo Giulia, the Stelvio also received an update for 2022 and got an update on the design and the drivetrain.

The Italian automaker introduced the Stelvio crossover in 2017. The name comes from a famous Italian mountain pass where the winding road took the drivers across the mountain. And it's pretty spectacular! Maybe less spectacular was the upgraded version, which was noticeable but not that obvious.

At the front, the vehicle received an improved front fascia that revealed a change in the "Trilobo" grille. That's how the Italians named the vertical triangle, pointed down, and the lower side scoops. In addition, there was a slimmer chromed trim on the triangle than on its predecessor, while the side air intakes were wider. Also, the headlights went through a change with the three LED daytime running lights that resembled the 1989 Alfa Romeo SZ Zagato. However, the profile had little to no differences, apart from new optional light-alloy wheels compared to its predecessor. At the back, the taillights got a sharper LED pattern.

Inside, everything resembled a Giulia, from the steering wheel with a push-button to start the engine to the gear selector for the automatic transmission. Yet, the dashboard was different but, like the Giulia, featured a 12.3" TFT screen for the instrument panel with three different layouts: Evolved, Relax, and Heritage. The high-bolstered front seats were unusual for a crossover, but they fitted the Stelvio very well.

Underneath the hood, Alfa Romeo introduced a new 160 PS (158 HP) turbo-diesel that sent its power to the rear wheels only, while the other two versions of 280 PS (276 HP) and the 210 PS (207 HP) powerplants sent their oomph in all corners. The most potent version was a turbocharged gasoline unit, while the other was a turbo-diesel. 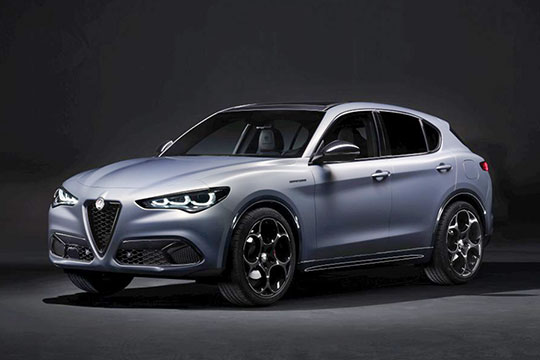