The Alfa Romeo Giulia marked the return of the famous Italian brand to the rear-wheel-drive architecture, which it lost it in the late '80s when the last Alfetta GT rolled out of the assembly line.

After the Alfa Romeo 156 and 159, it was hard to imagine a replacement for the latter, which looked modern even after a decade when it was launched on the market. But the Italians dared to do something even bolder. They moved the traction to the rear wheels and entered the competition against the German premium brands with a very spirited Alfa Romeo. Among other versions, the Veloce was built to balance the performance/economy ratio.

The Giulia came with wide headlights, sharp on the inside and extended over the fenders. A raked windscreen was installed for aerodynamic purposes. The cabin was moved backward, to enhance the image of a front-engine with a rear-wheel-drive car and to get a better weight distribution. The sleek profile sent the Giulia directly into the sport-sedan segment.

Inside, the Giulia Veloce (speed) was fitted as standard with a 6.5” infotainment display, placed next to the instrument cluster for easier reading. The dashboard was not as conservative as other cars on the market. The bucket-seats in the front suggested that the Veloce version will live up to its name. 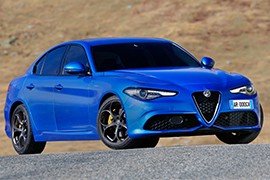