After Being Abandoned 27 Years Ago, This 1988 Camaro IROC-Z Hides Some Surprises

Home > News > Classics
Sebastian Toma
We are all familiar with the concept of barn finds, but what should we call vehicles found in storage units? Storage finds? Let's go with that, for now, so we can move on to the story of this 1988 Camaro that was abandoned in a storage unit for 27 years. It was discovered after the unit was sold at auction, and its new owner filmed its unveiling.
8 photos

You may be familiar with this YouTuber, as he recently supercharged his wife's Escalade in secret in just two days. Yes, Alex of LegitStreetCars is at it again, and it appears that his experience with a rusted-out Pontiac TransAm was not enough, and he wanted another late 80s GM machine to fix and create content with.

In the name of more content on YouTube and learning something, we salute this acquisition, which came in at just $1,500. At first, he agreed with the seller for $3,000, but a close inspection of the IROC Camaro revealed that it is far from the “mint condition” described. Fortunately, the seller was reasonable and realized that he had a customer with money in hand and accepted the offer for the Camaro.

Do not worry about the seller, as he got the 1988 Camaro along with many other items in the same storage unit, which had its contents sold for $900. Yes, just like on Storage Wars, but with less drama. Since Alex Palmeri has managed to get his WS6 Trans Am to 1,000 horsepower, one would expect something interesting to happen to this third-generation Camaro.

Before raising the power level of this Camaro through modifications, Alex will have to deal with rust. This Camaro has plenty of it, as you can observe, but it does seem to come without any rat damage, which is definitely a bonus. As someone who has acquired a vehicle that was the victim of those creatures, I can say you can be happy if you do not have any rats near your car.

The example in the video below is an MY1988 car, which is fitted with the IROC-Z package. All Camaros of that model year came with fuel injection as standard, and the 1988 vehicles also had the Z28 logos replaced by the "IROC-Z" inscription, among other changes.

This model year was the last before GM switched to chips in keys for the Camaro, which proved to be a lucky thing for the new owner of the IROC-Z, as a new set of keys had to be made. Since they did not require a chip, a locksmith was called, and magic happened. Check out the full video below. 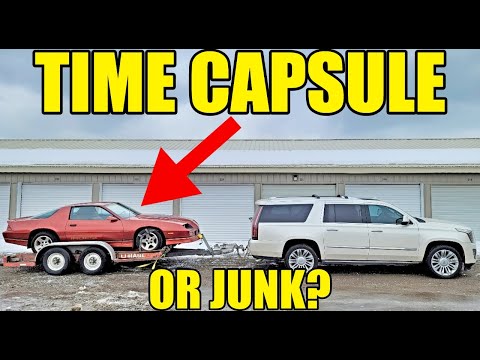