Between the X7 LCI (Life Cycle Impulse – aka facelift), the all-new split-headlight 7 Series (plus i7), and the massive 50th anniversary of M GmbH, BMW had quite a big lineup for the year.
28 photos

Alas, let us remember that 2022 is not over yet, and more things are coming from Bavaria. After all, the BMW brand has become a major target for our spy photographer partners, who were eager to capture stuff like the 2023 BMW M2 (complete with a feisty wing) or the 2024 BMW M5, complete with its production body and the new, electrified powertrain.

Of course, that quickly attracted the attention of virtual automotive artists, who are always eager to peel off the camouflage and CGI-reveal the goodies way ahead of their official premiere. One of the most prolific pixel masters with regards to such unofficial introductions is also the CGI expert better known as SRK Designs on social media.

And he decided to play with the CGI perspective of the recently spied, all-new BMW 5 Series but also introduced a couple of signature twists. So, after a recent EV stint across 2024 Kia EV9 and bold Hyundai Ioniq 7 N performance SUV territory, he is (mostly) back into the ICE-powered region with the 2024 BMW X5 M that dropped by to showcase its LCI goodies not long ago.

Now he continues along the same Bavarian road but the 2024 BMW 5 Series gets imagined as the all-new eighth generation with inspiration from recent models such as the X1, X3, “and the brand's flagship sedan, the BMW 7-series.” No worries, there are no split headlights here, and instead, the CGI expert went almost too OEM-focused about this project with a truly evolutionary styling.

Almost, though, since the pixel master also decided that a couple of twists are still in order, combining the M Performance looks with a sustainable eDrive-based plug-in hybrid powertrain! 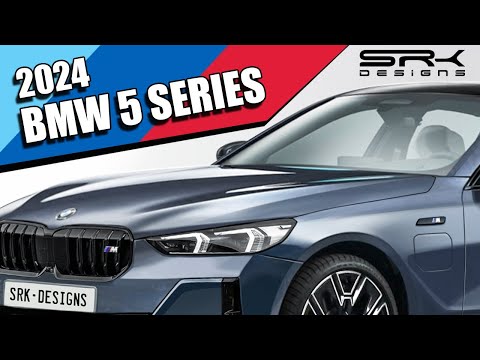