4 Chevy Corvette C8.R Championship Edition Is One of 1,000, Wants You to Make It Yours

Home > News > Car Profile
Mircea Panait
Eons ago, Chevrolet was rumored to be developing a supercharged V8-engined pickup that would outperform the Ford F-150 Raptor. This expectation fizzled out for the 2022 model year with the introduction of the Silverado ZR2, a half-ton overlander that certainly doesn’t live up to the off-road chops of the Dearborn manufacturer’s V6-engined truck.
12 photos

A few months ago, a certain someone uploaded a screenshot of the dealer ordering system on the Camaro5 forum. That screenshot confirmed the imminent arrival of the Bison, which is a beefed-up ZR2 with no sort of performance bump. In the background of the system, it’s downright easy to notice L87 as the RPO code for the 6.2-liter small block of the Silverado ZR2 that’s currently sitting in dealership forecourts. A naturally-aspirated mill with 420 horsepower and 460 pound-feet (624 Nm) of torque on deck, this lump is dubbed LT4 if a Roots-type supercharger is mounted on top.

Cadillac uses the LT4 in the Escalade-V performance utility vehicle. It’s actually the highest-performing version of the LT4 ever fitted to a series-production vehicle, packing 682 horsepower and 653 pound-feet (885 Nm). It would be fairly straightforward to shoehorn this engine under the hood of the Silverado ZR2 and Silverado ZR2 Bison given that all Escalades use half-ton pickup truck underpinnings, but alas, Chevy isn’t going to do it.

In light of the spoilers offered by the dealer ordering system, what else is there to look forward to? The biggest of the Big Three in Detroit has finally teased the Silverado ZR2 Bison in preparation for a summer 2022 debut, and goodies include plenty of black-painted underbody skid plates.

The front license plate mount features a bison and AEV letters in uppercase, confirming the automaker’s collaboration with American Expedition Vehicles. AEV also helps Chevrolet with the Colorado ZR2 Bison, which is one of the most capable mid-size pickups that money can buy right now.

Black emblems, a black grille, black wheels mounted with Goodyear Wrangler Territory rubber boots, a black-painted rear differential cover, and black for the upper half of the tailgate pretty much sum up the teaser clip. 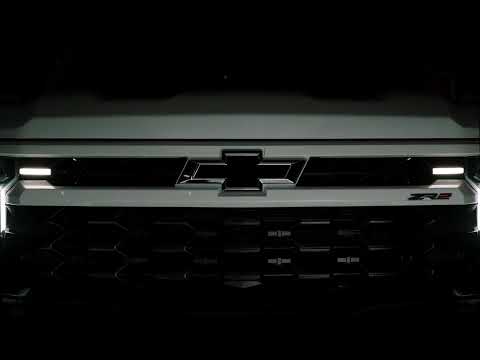