Škoda has updated its Karoq compact SUV four years after its debut. The Karoq now comes with improved aerodynamics, a new-look due to slimmer headlights, and several other design changes. On the inside, customers will find new tech, along with an upgraded engine range, but without any hybrid options.
51 photos

The second-most popular Škoda product, surpassed only by the Octavia, has over half a million units sold worldwide, so it was time for a careful redesign from the Czech marque. Changing your second best-selling product too much can be a risky move.

So, the designers rearranged the headlights, while also modifying the taillights, but focused on aerodynamics to improve the vehicle's ability to cut through the air. There is also a new front grille, along with rear window finlets and other elements implemented to make the vehicle more aerodynamic than the version it replaces. The company announces a drag coefficient (cd) of 0.30, which is a nine-percent improvement.

Customers can order full-LED Matrix headlights, while the level of driver assistance systems has been enhanced with the latest technology found in the company's range.

Interestingly, the Czech marque has refrained from offering the Karoq in hybrid or plug-in hybrid versions, preferring to stick with conventional power plants. Some versions are still available with all-wheel drive, while most only come with front-wheel drive.

When engines are concerned, the Karoq comes with five motors, which deliver from 110 ps (108 horsepower) to 190 ps (187 horsepower). The top-of-the-line one, a 2.0 TSI unit found on the SportLine model, comes with a seven-speed DSG transmission as standard, along with an all-wheel drive system. The latter is available as an option for the range-topping diesel motor.

Three engines in the range can be had with a choice of a six-speed manual transmission or a seven-speed DSG twin-clutch unit. In other words, except for the entry-level model and the range-topper, there is a choice between a manual or an automated gearbox, and the most powerful diesel in the range, a 150 PS (147 horsepower) 2.0 TDI EVO unit, also gets AWD with the choice of a seven-speed DSG unit.

The TDI engines come with SCR exhaust gas treatment, two catalytic converters, twin dosing AdBlue, and other modifications. According to the manufacturer, their crankshafts have been weight-optimized, while the exhaust gas routing has been redesigned for better thermal management.

The new TSI EVO units come with a boost in injection pressure, which is up to 350 bar, thus reducing fuel delivery rate and hydraulic losses, as Škoda explains. The 1.0 and 1.5 TSI units now come with a powder-coated layer of just 0.15 mm thick (150 μm) instead of cast-iron cylinder liners to reduce internal friction.

Customers get to choose from two new colors (Phoenix Orange and Graphite Grey), along with several other shades that add up to a total of nine. Various alloy wheel models, offered in 17-inch, 18-inch, and 19-inch flavors, allow customers to personalize their vehicles. Two trims levels are available along with a SportLine variant.

The facelift has not changed the size of the Škoda Karoq, nor its trunk capacity. The Czech company now offers an eco-pack for the interior, which involves seat covers made of vegan, recycled materials. The passenger seat can now be ordered in an electrically adjustable variant, while the LED ambient lighting has been enhanced.

The digital gauge cluster has become standard in the Karoq range, but customers will have to choose between an 8-inch and a 10.25-inch unit, as well as from four infotainment systems with touchscreens measuring up to 9.2 inches.

From a safety standpoint, the Škoda Karoq facelift comes with up to nine airbags, and customers can order things like Trailer Assist, Aerial View, and a package called Travel Assist. The latter includes between five and eight driver assistance systems. A new addition to the range comes in the form of rear side airbags as optional equipment in the Crew Protect Assist feature.

Pricing will be revealed at a later date. 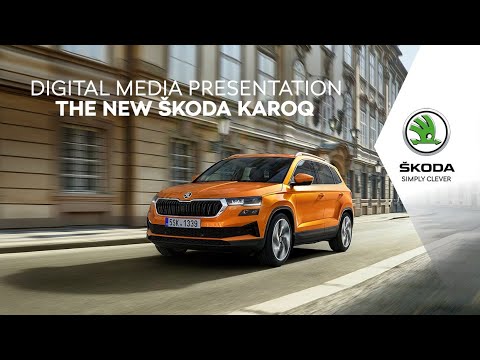