Skoda introduced the fourth generation of its small-segment contender, Fabia, in 2021, and its features outrun many compact and mid-size vehicles.

When Volkswagen bought the Czech carmaker, Skoda, its intention was to make it a budget company, which relied on its sales figures rather than in profit per unit. It helped it with technology and many other improvements, but in the end, it was about the Czech workers' stubbornness to build the car properly and make them one of the most reliable in the Volkswagen Group. The Fabia came on the market in 1999, and it was more or less a Volkswagen Polo with different bodywork. In 2021, the Fabia received the MQB-A0 platform used by Audi A1, Volkswagen Polo, and SEAT Ibiza, to name just a few.

The exterior was still dominated by sharp angles and straight lines, resembling the Czech Cubism design concept. Its wide grille with vertical slats and chromed surrounding matched the look of its bigger brothers Scala, Octavia, and Superb. Its front bumper sported a wide grille at the bottom that hosted the side-mounted fog lights. From its sides, the design team made some sculptured areas on the lower side of the doors to channel the air and prevent turbulence near the bodywork. Its 0.28 aerodynamic coefficient confirmed that the engineers' efforts were not in vain.

Inside, Skoda offered one of the roomiest interiors in the segment to that date. The carmaker provided an option for a 10.25" digital instrument cluster and a 9.2" infotainment system, depending on the trim level. Its wheelbase allowed enough room for up to five passengers and a 380 liter (13.4 cu-ft) of trunk space. An intelligent option was the umbrella incorporated into the front driver's door.

Under the hood, Skoda installed a five-engine choice ranged between 65 hp and 150 hp. 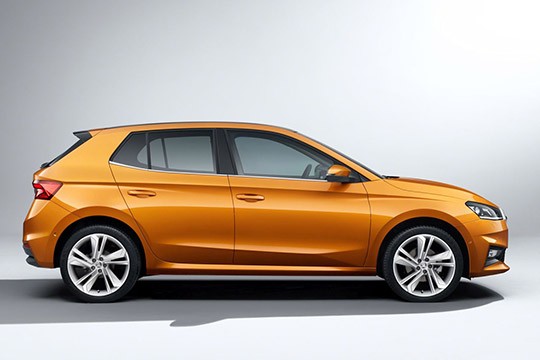