Home > News > Car Profile
Mihnea Radu
DSG gearboxes and TSI engines don't have the best reputation in the reliability department. However, they make for a compelling performance combo, especially in crossovers, which are usually quite slow.
1 photo
We remember how amazing it was for a super-heavy Skoda Octavia RS to defeat a John Cooper Works MINI. And while people aren't going to race a Skoda Karoq, its performance could catch people off guard.

This is a new model we recently talked about, featuring 190 HP, 10 more than the last model year, plus 320 Nm of necessary pulling power. As standard, this combo is hooked up to a 7-speed DSG and Skoda's 4x4, which allows the crossover to reach 100 km/h in just 7 seconds from a standstill.

That's about the same as the smaller VW T-Roc and the SEAT Ateca with the same 2-liter turbo engine. Crucially, the Karoq could keep up with a Mk5 Golf GTI. We don't think the engine sounds as good as the original hot hatch, plus what you hear in the video is piped artificially into the cabin.

The Karoq 2.0 TSI model is only available from the SportLine trim level, which comes with a body kit and big wheels. Prices fo range from £34,120 for the seven-seat SE L model up to £38,770 for the seven-seat L&K variant flagship. In Germany, this is €36,420, only a bit less expensive than a 2-liter diesel.

It's not cheap, but most similarly sized crossovers aren't this fast. For example, a Mazda CX-5 with the 250 horsepower turbo engine realistically takes about 7.63 seconds to get to 100 km/h. Of course, you can get decent performance from a second-hand BMW X3 for the same kind of money.

And if you still want more, rumor has it that Skoda is developing a 300 horsepower Karoq RS model, which would be its fastest car ever. Of course, it's only a rumor at this point. 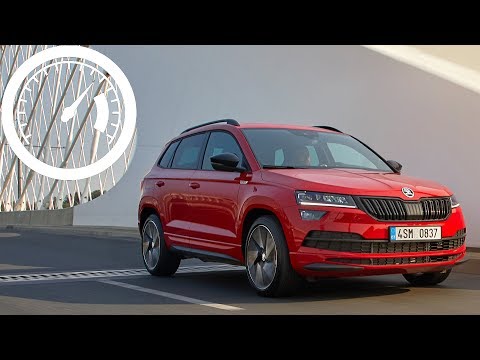