2 Supercars Handled with Gaming Console Controllers Are a Neat Trick

The best, most entertaining grandpa race car driver in the world, Tiff Needell, is back with another cool hot hatch shootout. This time, we have an odd competition between three direct rivals, the i30 N, Megane RS, and 308 GTi, plus two offbeat choices, the smaller MINI JCW, and the sedan-shaped Octavia RS.
3 photos

Lovecars is an up and coming UK channel, and Tiff is putting a lot of time into it because they only filmed one season for the Fifth Gear comeback. This hot hatch shootout takes places at the magnificent Celtic Manor Resort in South Wales and quickly moves to the Llandow Circuit to see which hot hatch under £30,000 is the best.

As Tiff gets behind the wheel of each car and does a scary lap, the discussions turn to power-to-weight ratios, where the Skoda Octavia RS is the worst. However, the notion that it's slow is blown away by the fact that it's faster around the track than the MINI and even manages to reach the finals of the drag racing challenge.

The unimpressive powertrain is excellent for drag races. Skoda tuned the 245 horsepower 2-liter turbo for low-end torque. There's 370 Nm here, a lot more than in the Peugeot 308 GTi. Also, all FWD cars have traction limitation when launching, but the DSG can be an advantage.

There's no clear winner here. But it's interesting to see that the 230 horsepower super-light MINI JCW is slower than a Skoda sedan and that around the tight track, the nimble Peugeot can be faster than a much more expensive Megane RS.

But after all the racing is done, all three of the guest drivers wanted to take the Hyundai i30 N home, and we can see why. It's exciting to drive, cheap and sounds great. Meanwhile, Tiff liked the Megane RS more, but it might something to do with that orange paint. 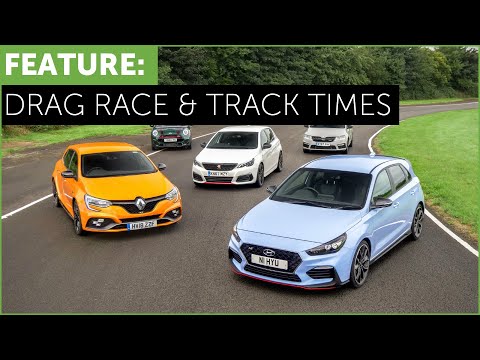