Skoda opened its factory in India and began producing cars in March 2021, with the Kushaq as the first model.

Then, in November same year, it launched the Slavia.

While the Kushaq was a crossover, the Slavia aimed at lower prices. Thanks to its lower price, the sedan aimed at the masses rather than its taller and older brother. Skoda built it on a specific version of the MQB-A0 platform, which received the -IN mark at the end, meaning it was made in and for the Indian market.

Following the same design language as its European siblings, the Slavia featured angular lines and clear-cut headlights without too many curved lines at the front fascia. A chromed rim surrounded the grille that sported black, vertical slats. From its sides, its tall door panels followed an ascending beltline, while the sloped roofline emerged to the trunk area. At the back, the designers place a pair of slim LED lights on the trunk's lid, complementing the C-shaped taillights.

The interior revealed a minimalist, cubist design language with a 7" infotainment screen that sat atop the center stack. A 10" unit was available as an option. For the base trim levels, the driver benefited from analog dials, while the top trim level, named Style, received an 8" TFT instrument cluster. Depending on the trim level and options, the carmaker delivered the Slavia with a six-speed automatic transmission and paddle-shifters behind the two-spoke steering wheel.
Under the hood, Skoda offered a choice of two gasoline engines: a 1.0-liter inline-three and an inline-four with 1.5-liter displacement, both units being turbocharged. For the drivetrain, up front, the Slavia featured McPherson struts while the rear benefited from a twisting-arm semi-independent suspension. 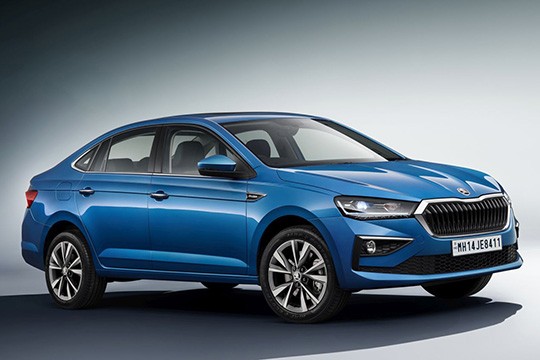