5 Trek's "Most Affordable" Powerfly 4 Will Still Empty Your Pockets of a Little Under $4K
Car video reviews:
Up Next

Gas Reached a National Average Price of $5 a Gallon, Here's What Can Be Done To Lower It

"There I was, at the front of the pack with only a mile to go. Out of nowhere, another cyclist blasted past me like he was riding a rocket, and I came in second. I don't know how he did it, but I later discovered that Trek's lightest road bike was the culprit, an Émonda."

Folks, the gentleman above described how he had lost a cycling competition at the hands of a cyclist rocking Trek's 2022 Émonda SLR 9. It's a machine built to encompass all the best that Trek has to offer, and while its price tag of $12,550 (€11,900 at current exchange rates) means that this machine is reserved for diehard cyclists bent on bringing home the gold, we can still drool over a sort of Ferrari of the cycling world.

By now, you've picked up that Trek is the crew behind the magic we'll be witnessing today, which means something. With a company history dating back to 1975, over the years, Trek has grown to be one of the world's leading bicycle designers and manufacturers. As for the Émonda SLR 9, it wraps nearly 50 years of R&D into one seconds-shaving machine.

It does this with a carbon fiber frame, which isn't just built to be light but shaped in such a way as to be as aerodynamic as possible. The result is a road bike that weighs 6.72 kilograms (14.8 pounds) with all secondary equipment mounted on it, stock that is. Nonetheless, for nearly $13K, this stock bicycle will bear the best components around. As for the frame alone, it weighs just under 700 grams (1.54 pounds). I've eaten steaks bigger than that.

This brings me to the next topic of discussion, drivetrains. If you're aware of recent cycling developments, you know that Sram, Shimano, and Campagnolo are three of the most sought-after drivetrain manufacturers on the market. However, Sram and Shimano feature wirelessly shifting drivetrains, and for the SLR 9, Trek drops Shimano's best work, a full Dura-Ace Di2 setup.

What does this mean for the rider? It means a shifting experience with unparalleled accuracy, smoothness, and response; just tap your shifter and feel the magic happen. As for the rest of this machine, like most other bikes to come off Trek manufacturing lines, Bontrager will be completing most of the other gear on the bike like the integrated stem, rims, handlebar, all the way to the saddle and hubs.

Now, that's not the end of this story. To ensure that competitive cyclists are riding a bike worth every penny, Trek has integrated some features to the SLR 9 that prove you have the best chance in the next leg of your competition. One of those features is the H1.5 geometry which places the rider "in optimal aero race position," a feature developed in collaboration with Trek-Segafredo teams.

If you're still wondering why Trek is asking you to drop this much on one of their bikes, let's dive a little deeper into all that is the Émonda. To develop a machine that can stand up to all that Trek says it can do, their team of "rocket scientists" ran simulation after simulation on the frame to make sure you get the best of the best.

As an added bonus, for both rider and Trek, the Émonda SLR 9 is one of the bikes that Trek allows you to customize through their Project One program. Ever heard of Project One? Well, when you tell this manufacturer that you've got the extra bucks to embark upon this adventure, Trek will allow you to customize every aspect of this bike, down to unique paint jobs and different components.

When I say customize, I really mean it; you'll be offered category after category of paints, brake sets, drivetrains, and handlebars, enough to keep you locked in the process for hours. Once you're finished, you could be looking at a one-of-a-kind bike that costs as much as some new cars. But, you should be enjoying it for as long as you shall live, and that's worth the cash if you ask me. 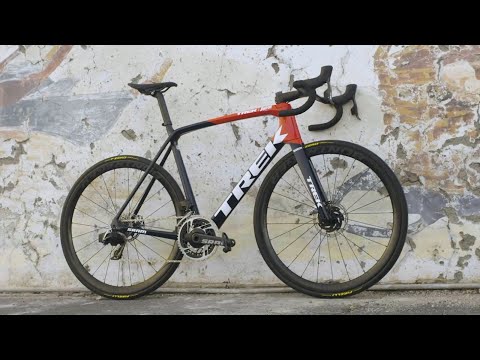 Editor's note: This article was not sponsored or supported by a third-party.
The image gallery features an array of color options for the Emonda SLR 9.