1 Focus Bike Light Is as Powerful as Your Car's Headlights, Can Put Out 5,000 Lumens

3 DVR80 Bike Tail Light Watches Over You When You Ride, Comes With Integrated Full HD Camera

4 ICON3 Bike Light Puts Out 575 Lumens, Reacts to the Environment to Make You More Visible

5 This Bike Light Records Videos of Cars Passing You by, Holds as Proof in Court
Editorial

Cristina Mircea
While automatic brake lights might seem more convenient, they are not the most reliable options you can find for your bike or scooter, as they don’t always work as they’re supposed to. This is why this French company has come up with what it claims to be a better solution, developing its own light and braking trigger technology to go with it.
8 photos

The manufacturer’s name is Overade and specializes in accessories for micromobility vehicles. Some of its best-selling products are its folding bike helmets, but I’ve got a feeling that the new OxiLum and OxiBrake are right on the money as well.

The OxiLum is just a brake light that gets mounted on your helmet, or at least that’s what it looks like at first glance. But in addition to being highly visible and offering great autonomy, it also has another feature that makes it special: the pairing OxiBrake, which is basically its triggering mechanism.

To be more specific, the OxiLum is turned on and off by the OxiBrake, which is a metal device that gets mounted on your brake lever on your bike’s handlebars. OxiLum and OxiBrake communicate with one another via sensors, so before you start using them, you have to pair them by pushing the button in the middle of the OxiLum light. The pressure sensor in the OxiBrake sends a signal to the light every time you squeeze the brake lever, which causes the OxiLum to light up.

Overade considers this physical approach to be more reliable than the accelerometer-based technology used in most automatic helmet-mounted lights because those can often fail to function properly for various reasons. For instance, they can get confused by your head movements and light up when they shouldn’t. The opposite can also happen and the light might not turn on even though you are braking, because speed reduction when braking is low when you are on a bike or scooter, so the device might have a hard time accurately detecting your action.

While OxiLum was designed to work with the OxiBrake, you can of course choose to use the former by itself, as any ordinary tail light, and turn it on manually using the button in the middle. OxiLum fits any helmet and offers eight lighting modes: five in the red color and three in white. On the highest setting, it has an autonomy of six hours, when used continuously at 100 lumens.

The OxiBrake has an autonomy of up to one month and fits various types of levers, for bicycles and electric scooters. A single unit can power up to four OxiLum lights.
Both devices get charged via USB.

You can now find the OxiLum and OxyBrake on Kickstarter and get one unit of each for a total price of approximately $60. The estimated delivery date is this September. There is almost one month left in the campaign so you still have time to purchase them at a discounted price. 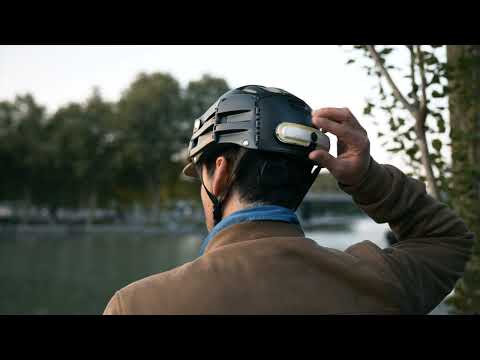