Although rivals like Jeep and Ford have achieved tremendous success with legendary off-road nameplates such as Wrangler and Bronco, General Motors is obstinately following the bland crossover SUV route for their mid-size Blazer offering. And virtual fans are not fine with that.
18 photos

Frankly, it could be said that almost no vintage GM enthusiast is OK with that sporty yet tame interpretation of a nameplate that should be tough, rough, and never ready to say a trail is more than enough. Alas, there is little one could do to change the 2024 Chevy Blazer EV route that has been envisioned by the top company brass for this iconic moniker. At least, not in the real world.

Over across the virtual realm, automotive pixel masters have been keen to imagine all sorts of possible K5 Blazer-based or inspired reinterpretations of current models. The latest unofficial reinvention arrives courtesy of the CGI expert better known as SRK Designs on social media, who knows very well General Motors will never produce it but still could not help creating a two-door Chevy Tahoe.

This is a figment of imagination coming from a digital content creator that usually dabbles with Euro or JDM stuff and less with the Americana part of the car industry. Nevertheless, we have seen bold North American ideas from him, most of the EV variety. This time around, though, everything is kept as simple as possible – the same powertrain and a shorter wheelbase plus just two doors – for the latest behind-the-scenes making-of video embedded below.

And, frankly, K5 Blazer aficionados would have reason to sanction this, even if the digital project does not present itself as overly lenient on vintage design cues. Yet, one cannot say that it does not immediately strike out as a spiritual successor, and a single look at the well-known profile line will suffice to make the CGI connection. Too bad it’s just wishful thinking, as always… 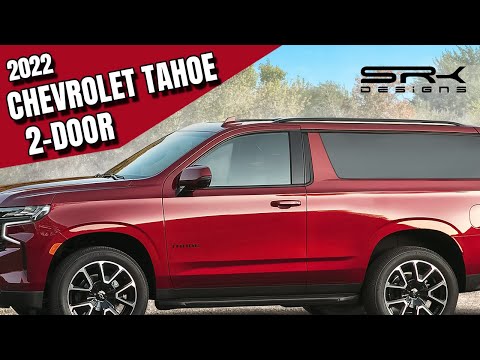