The Cal City Desert Challenge is a brutal conclusion of the 2021 Best in the Desert season. That’s why Chad Hall Racing went for a second championship in their prototype Silverado.

Working directly with Chevrolet engineers since 2019, their trucks are what we will see in dealers early next year. The most potent Silverado ever offered by the factory has been punished by ten races already. Last weekend’s Cal City Desert Challenge was a 30-mile loop around the outskirts of California City, a tough course that lies halfway between Barstow and Bakersfield.

Starting where it counts, the Silverado ZR2 represents an easy way to access the Escalade’s 6.2-liter V8 and 10-speed automatic. From there, it is the Bowtie Brand’s first example with DSSV suspension that makes use of three spool valves and interconnected reservoirs. Specially tuned coils are designed to maximize your ride-height while locking differentials will keep you moving.

Diving into the details, a new front bumper protects the engine bay while forcing air into the “Flow Tie” grille badge. More capable front brakes take orders from the traction control system to offer one-pedal rock crawling. Wheeling is made easier thanks to a 31-degree approach angle and 460 lb-ft of torque. Unique 18” wheels are wrapped in 33” mud terrains, and the two-tone leather interior is comprised of Black over Graystone. The only items that might be altered before production begins are subtle changes to the body panels. Chevy is investing in all-new tooling to stamp aggressive steel, so rest assured, it won’t look like anything else on the road or in the desert.

Winning its second-consecutive “Best in the Desert” award is a testament to the collaboration with Hall Racing, who said: “It has been very rewarding to field vehicles that are so well engineered. The tests and refinements made over the years with the Colorado ZR2 and the new Silverado ZR2 absolutely prove the adage that racing improves the breed — making the production vehicles stronger and more capable because of it.”

While finishing work continues on the upcoming electric Silverado, a second team of GM engineers has been hard at work building a ZR2 version of the 2022 Colorado. Little brother has also been in development for several years. No less than 15 new parts have been created and added to dealer inventories around the nation. It all starts with the same DSSV suspension that’s licensed from Multimatic. Because the Colorado is a bit smaller, the axles and control arms have spherical rod-end bushings. New leaf springs are arched for maximum ground clearance and steel driveshafts replace aluminum. The real treat is your choice of power.

It’s easy to make 400 horsepower with the 3.6-liter V6 that GM stuffs into everything. Having owned a few examples in late-model Cadillacs, they are fun and efficient. However, that strange sound from a new Colorado ZR2 is made by burning oil. The 2.4-liter diesel offers 369 lb-ft (500 Nm) of torque and 181 horsepower. If #tuningmonth has taught you anything, you know why we would choose the down-low grunt. Open up the exhaust and crank up the turbo for the ultimate desert machine.

Chevrolet Performance Parts has taken over the old GM Performance duties, and specializing on these two models has allowed them to build a pair of comprehensive contenders. Both models will be available at all Chevy dealers, along with the individual parts of each truck. The Awards Ceremony will be held on December 11th, so expect a full recap soon after, right here. Build your own by ordering them at the Parts Department, then watch them in action for the 2022 Best in the Desert series! 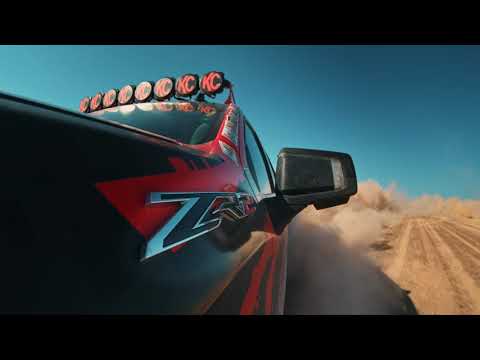